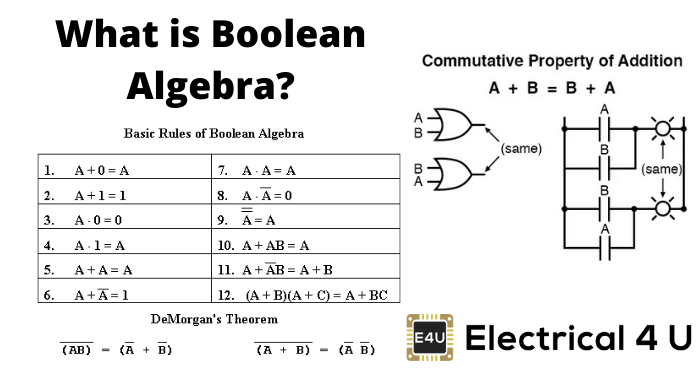 What is Boolean Algebra?

Boolean algebra is a different kind of algebra or rather can be said a new kind of algebra which was invented by world-famous mathematician George Boole in the year of 1854. He published it in his book “An Investigation of the Laws of Thought”.

Later using this technique Claude Shannon introduced a new type of algebra which is termed as Switching Algebra. In digital electronics, there are several methods of simplifying the design of logic circuits. This algebra is one of these methods.

According to George Boole symbols can be used to represent the structure of logical thoughts. This type of algebra deals with the rules or laws, which are known as laws of Boolean algebra by which the logical operations are carried out.

There are also few theorems of Boolean algebra, that are needed to be noticed carefully because these make calculation fastest and easier. Boolean logic deals with only two variables, 1 and 0 by which all the mathematical operations are to be performed.

There are many rules in Boolean algebra by which those mathematical operations are done. In Boolean algebra, the variables are represented by English Capital Letter like A, B, C, etc and the value of each variable can be either 1 or 0, nothing else.

In Boolean algebra, an expression given can also be converted into a logic diagram using different logic gates like AND gate, OR gate and NOT gate, NOR gates, NAND gates, XOR gates, XNOR gates, etc.

Some basic laws for Boolean Algebra

According to Cumulative Law, the order of OR operations and AND operations conducted on the variables makes no differences.

This law is composed of two operators, AND and OR.

From the truth table,

From the truth table, it is proved that,

Both A and A+A.B column is the same.

These are another method of simplifying a complex Boolean expression. In this method, we only use three simple steps.

will be first complemented, i.e.

Now, complement each of the variables,

This is the final simplified form of a Boolean expression,

And it is exactly equal to the results which have been come by applying De Morgan Theorem.
Another example,

By the Second Method,

Now let us represent the function in the truth table.

Thus we have shown some basic laws of Boolean algebra. On the other page, we have described De Morgan’s theorems and related laws on it.