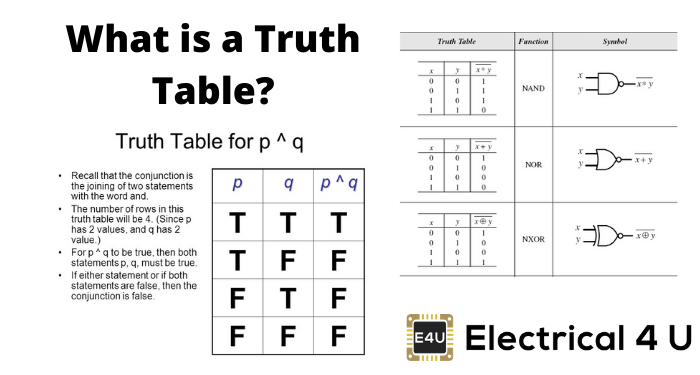 What is a Truth Table?

A truth table is a mathematical table that lists the output of a particular digital logic circuit for all the possible combinations of its inputs. These truth tables can be used to deduce the logical expression for a given digital circuit, and are used extensively in Boolean algebra.

A truth table has one column for each input variable (commonly represented as P and Q, x and y, or a and b), and one final column showing all of the possible results of the logical operation that the table represents (for example, P AND Q).

Each row of the truth table contains one possible configuration of the input variables (for example, P=false [0] Q=true [1]), and the result of the operation for those values (continuing the example, P AND Q=false [0]).

Logic gate questions are a great way to test your knowledge on the topic of truth tables.

NOT Gate or an Inverter Truth Table

NOT gate is a single-in single-out logical device where the output will always be the complementary form of the input.

This means that the output is 0 for input equal to 1 and vice versa, as indicated by the truth table. This is symbolically written as Y = X̅.

AND gate is a basic gate with multiple inputs and a single output. This gate has its output high only if all its inputs are one, failing which the output will be zero as shown by the truth table. The logical expression corresponding to this gate is given as Y = I1.I2.

OR is a type of basic gate with multi-input, single-output characteristics. Here the output is zero only if all of its input bits are zero as indicated by the truth table of 2-input OR gate. The logical expression for the OR gate is given as

NAND gate is logically equivalent to AND gate followed by a NOT gate. The truth table for this gate shows that the output of the NAND gate is low only if all of its inputs are high (else it is one).

NOR gate is a result of combining NOT gate with an OR gate. Thus its output is the negation of OR gate output which implies that it has high output only if all of its inputs are low.

However, for any other combination of inputs, the output will be low as shown by the truth table. A logical expression for the same can be given as

XOR gate is a logical device that has its output high only when its inputs are different, as shown by the truth table. This means that non-identical inputs result in a high output of the gate while identical input bits cause the gate output to go low.

Logically this is given by

Further in its expanded form, one gets

In general XOR gate is used as a parity checker and can have multiple inputs. 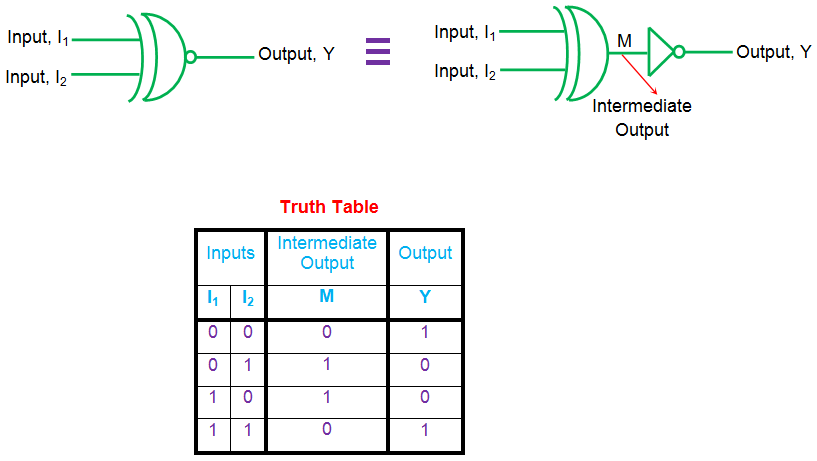 XNOR gate is a result of combining the XOR gate with a NOT gate, which means that the output will be the inverted form of the XOR outputs.

This gate can also have multiple inputs and serves as a parity checker.