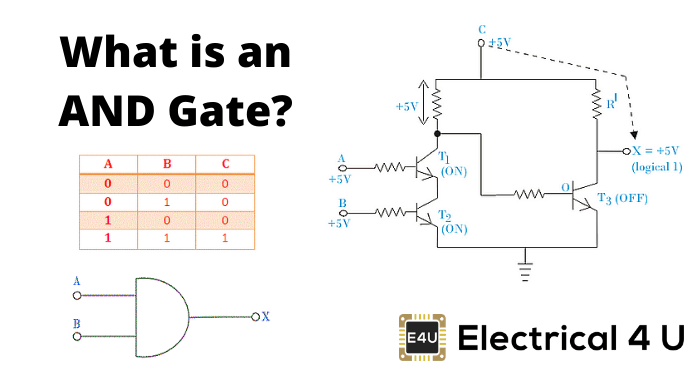 What is an AND Gate?

There are many integrated circuits that work on this logic which we will revisit later on. Let us first get a better understanding of how the output of an AND Gate output behaves with respect to its inputs.

An AND gate may have any number of input probes but only one output probe.

The symbol for a two-input AND gate is logically represented as:

Where A and B represent the input of the gate and X represents the output. A, B, and X can either be 0 (low) or 1 (high) logically.

The logical operation of AND gate hence can be represented as:

If instead of two inputs there are three inputs, this changes the logical symbol and truth table of the AND gate.

The logical symbol of a 3-input AND gate is represented as:

The truth table of a 3 input AND gate is:

In digital electronics, other logic gates include NOT gates, OR gates, NAND gates, NOR gates, XOR gates, XNOR gates.

Normally an AND gate is designed by either diodes or transistors.

In the above diode circuit, we first apply +5V at C. Now if we apply +5V at A and B, both of the diodes are reversed biased and hence behave both diodes as OFF or open circuit.

In this situation as both diodes are OFF, no current will flow through resistor R and voltage of C (+5V) will also appear at X. As the supply voltage +5V appears at X, the output of the circuit is considered as high or logical 1.

Now, if either point A or B or both are applied with 0 Volt or they are grounded, the respective diode will become forward biased and hence behaves as ‘ON’ or short-circuited. In this condition, supply voltage +5V at point C will get a path through either of diodes or both to the ground potential.

As the current flowing from C to the ground through resistor R, the entire 5V will be dropped across the resistor and hence the voltage at X will become low or logically zero.

The diodes in the forwarding biased condition do not behave as an ideal short circuit; some voltage drop will be there across the forward biased diodes which are equal to forward bias voltage.

This voltage drop will appear at X during low output condition, so the practically low output will not be 0V it is rather 0.6 to 0.7V which is ideally considered as zero.

An AND logic gate can also be realized from the transistor AND gate. The transistor circuit diagram for an AND gate is shown below:

In the above circuit when A or B or both A and B are grounded or at 0V potential transistor T1 or T2 or both T1 and T2 are in OFF condition respectively.

The current then starts flowing the supply to the ground through T3. As a result, the entire supply voltage will drop across R1, and the potential of terminal X will become low or logical zero. 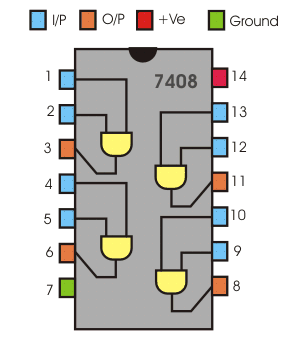 Pin 14 is the supply input which can be a maximum of 5.2 volt D.C. if input voltage be more than this it may cause damage to the IC. 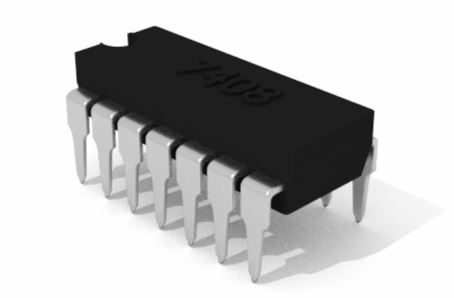 In CMOS logic i.e complimentary MOSFET logic I.C number of AND Gate is 4081. This IC also has two inputs and one respective output. In this IC there are also 4 gates together. Now see the below internal diagram of this circuit to make it more clear. 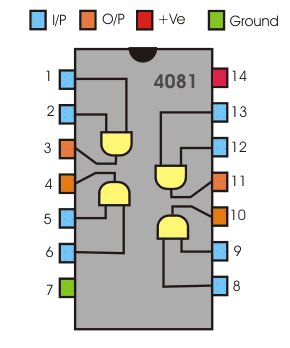 Here too if more voltage is given if may damage the IC. Inter circuit of CMOS and TTL differs from each other which must be noticed carefully.