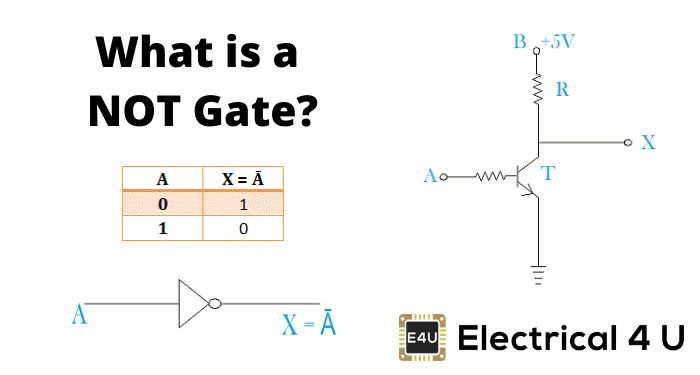 What is a NOT Gate?

Truth tables list the output of a particular digital logic circuit for all the possible combinations of its inputs. The truth table of a NOT gate can be represented as:

A NOT gate can easily be realized by using a simple bipolar transistor. The transistor circuit diagram of a NOT gate (also known as a transistor inverter) is shown below:

The transistor diagram above will be used to demonstrate how a NOTE gate works.

How a NOT Gate Works

Let us examine the above transistor circuit when a high input voltage is applied, i.e. +5V.

In this condition, the transistor T gets enough base potential to make it ‘ON’.

This collector-emitter voltage is about 0.6V. So, at the above-said input condition, the entire supply voltage +5V will not drop across the resistor instead it will be 5 – 0.6 = 4.4V. So, 0.6V is practically considered as logical zero or low.

Now let us examine the condition, where input A = 0V i.e. base terminal of the transistor is given with 0V or grounded.

The IC available at the market for NOT gate is IC 7404. One 7404 IC contains a total of six transistors inverter or simply six NOT gate.