What is an Electrical Resistor?

In an electrical and electronic circuit, the primary function of a resistor is to “resist” the flow of electrons, i.e., electric current. That is why it is called a “resistor”.

Resistors are passive electrical elements. This means they cannot deliver any energy to the circuit, and instead, they receive energy and dissipates it in the form of heat as long as a current flowing through it.

According to ohm’s law, the voltage (V) across a resistor is directly proportional to the current (I) flowing through it. Where the resistance R is the constant of proportionality.

What Does a Resistor do?

For example, many resistors are connected in series used to limit the current flowing through the light-emitting diode (LED). Other examples are discussed below.

Each element in an electrical circuit, like a light or a switch, requires a specific voltage. For that, resistors are used to provide proper voltage by creating a voltage drop across elements.

What is Electrical Resistance Measured in (Resistor Units)?

The SI unit for a resistor (the electrical resistance is measured in) Ohm and is represented as Ω. The unit ohm (Ω) is named honor of the great German physicist and mathematician Georg Simon Ohm.

In SI system, an ohm is equal to a 1 volt per ampere. Thus,

Therefore, the resistor is also measured in volt per ampere.

There are two main circuit symbols used for electrical resistors. The most common symbol for a resistor is a zig-zag line which is widely used in North America.

The other circuit symbol for a resistor is a small rectangle widely used in Europe and Asia, and this is termed the international resistor symbol.

The circuit symbol for resistors as shown in the image below.

The circuit below shows a number of resistors n connected in series.

If two or more resistors are connected in series, then the equivalent resistance of the series-connected resistors is equal to the sum of their individual resistances.

Mathematically, this is expressed as

As shown in the circuit below, three resistors, 5 Ω, 10 Ω, and 15 Ω, are connected in series. Find the equivalent resistance of the series-connected resistors.

Thus, we get equivalent resistance of series connected resistors is 25 Ω.

The circuit below shows a number of resistors n connected in parallel.

Mathematically, this is expressed as

As shown in the circuit below, three resistors with resistance 10 Ω, 20 Ω, and 30 Ω, are connected in parallel. Find the equivalent resistance of the parallel-connected resistors.

According to the formula for parallel resistance, 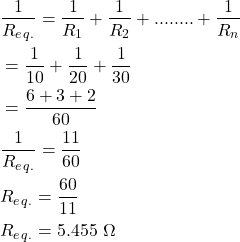 Thus, we get an equivalent resistance of the parallel connected resistors equal to 5.455 Ω.

Limiting current is very important in an LED. If too much current is flowing through an LED, it will get damaged. Therefore, a current limiting resistor is used to limit or reduce the current into an LED.

While calculating the value of a current-limiting resistor, we need to know three specifications or characteristics value of the LED:

The forward voltage is the voltage required to make an LED on, and it is usually between 1.7 V to 3.4 V, depending on the color of the LED lights. The maximum forward current is the continuous current flowing through the LED, and it is usually around 20 mA for basic LEDs.

Now, we can calculate the necessary value of the current limiting resistor using the following equation,

Let’s see an example of calculating the necessary value of the current limiting resistor using the above formula.

As shown in the image below, a battery voltage of 3.8 V has used to power an LED. The forward voltage and maximum forward current of an LED are 3.1 V, and 30 mA. find the necessary value of the current limiting resistor.

Put this value into equation,

So, we get the necessary value of the resistor to limit the current flowing through an LED is 23.3 Ω.

Pull-up Resistors are resistors used in electronic logic circuits to ensure a known state for a signal.

In other words, Pull-up resistors are used to ensure that a wire is pulled to a high logical level when there is no input condition. A pull-down resistor works similar to the pull-up resistors, except that they pulled a wire to a logical low level.

Pull-up resistors are used in combination with transistors, switches, buttons, etc., which interrupt the physical connection of subsequent components to the ground or VCC. For example, the pull-up resistor circuit is shown in the image below.

A typical value of pull-up resistor is 4.7 kΩ but it can vary depending on the application.

Voltage Drop Across a Resistor

As we know, a resistor is a passive electrical element that provides electrical resistance to the flow of current. Thus, according to ohm’s law, it will create a voltage drop when the current passes through a resistor.

Mathematically, voltage drop across a resistor can be expressed as,

To determine the sign for the voltage drops across a resistor, a direction of current is very important.

Consider a resistor of resistance R in which current (I) flows from point A to point B, as shown in the image below.

Hence, it is clear that the sign of voltage drop across a resistor depends on the direction of current through that resistor.

Resistor Colour Codes are used to identify resistive or resistance value and percentage tolerance of any resistors. The resistor’s color codes use colored bands to identify it.

As shown in the figure below, there are four color bands printed on the resistor. Out of the three bands are printed side by side, and the fourth band is printed slightly away from the third band.

The table below shows significant figures, decimal multiplier, and tolerance for different color coding of resistors.

Example (How to Calculate Resistor Value?)

As shown in the image below, a carbon color-coded resistor has the first ring of green, second of blue, third of red, and fourth of golden color. Find the specifications of the resistor.

As per table of color coding of resistors,

Thus, the value of resistance is

Hence, the value of resistance is in between

Hence, the value of resistance is in between

Sometimes, resistors can be so small that color coding is difficult to apply. In such cases, a character or letter coding is used for specifications of resistors. It is also referred to as RKM code.

The characters used for coding resistors are R, K, and M. When there is a character between two decimal numbers, it acts as a decimal point. For example, the character R indicates Ohms, K indicates Kilo ohms, and M indicates Mega ohms. Let’s see examples of this.

Tolerance is indicated as

There are various types of resistors, each with its own unique properties and specific use cases.

There are two basic types of resistors available Fixed resistors and Variable resistors. Both the types are listed below.

The types of variable resistors are listed below.

Other special variety of resistors include:

Resistors sizes are organized into a set of different series of standard resistor values. In 1952 the International Electrotechnical Commission decided to determine the standard resistance and tolerance values to increase compatibility between components and ease manufacturing of resistors.

The E3 resistor series are most common resistor values used in electronics industry.

The E3 resistor series is also most commonly used, and it provides a wide range of common resistors values.

What is a Resistor Made of?

Depending on the application, there are variety of materials used to make resistor.

Some of the applications of the resistor include: