Silicon Controlled Rectifier (SCR) is a unidirectional semiconductor device made of silicon. This device is the solid state equivalent of thyratron and hence it is also referred to as thyristor or thyroid transistor. In fact, SCR (Silicon Controlled Rectifier) is a trade name given to the thyristor by General Electric Company. Basically, SCR is a three-terminal, four-layer semiconductor device consisting of alternate layers of p-type and n-type material.

Hence it has three pn junctions J1, J2 and J3. The figure below shows an SCR with the layers p-n-p-n. The device has terminals Anode(A), Cathode(K) and the Gate(G). The Gate terminal(G) is attached to the p-layer nearer to the Cathode(K) terminal.

The symbol of SCR or Thyristor is shown in the figure below.

An SCR can be considered as two inter-connected transistors as shown below. 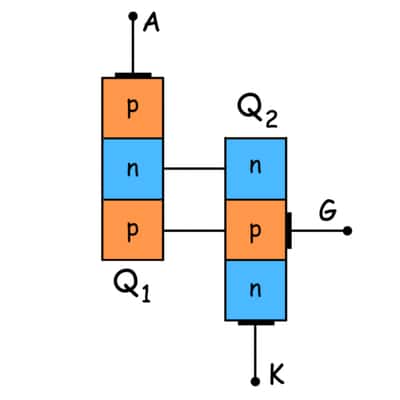 The working of SCR can be understood by analyzing its behavior in the following modes:

In this mode, the SCR is reverse biased by connecting its anode terminal (A) to negative end and the cathode terminal (K) to the positive end of the battery. This leads to the reverse biasing of the junctions J1 and J3, which in turn prohibits the flow of current through the device, in spite of the fact that the junction J2 remains in forward biased condition. 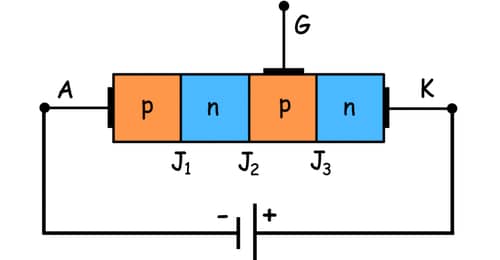 In this state, the SCR behaves as a typical diode. In this reverse biased condition, only reverse saturation current flows through the device as in the case of the reverse biased diode which is shown in the characteristic curve by blue line. The device also exhibits the reverse breakdown phenomenon beyond a reverse safe voltage limit just like a diode.

Here a positive bias is applied to the SCR by connecting anode terminal (A) to the positive and cathode terminal (K) to the negative terminal of the battery, as shown in the figure below. Under this condition, the junction J1 and J3 get forward biased while junction J2 gets reverse biased. 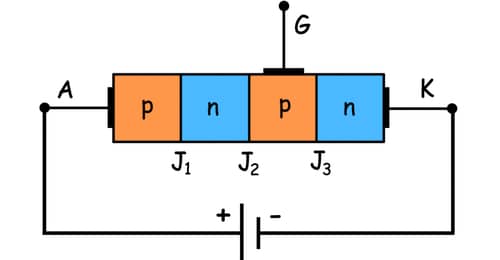 Here also current cannot pass through the thyristor except the tiny current flowing as saturation current as shown by the blue curve in the characteristics curve below. 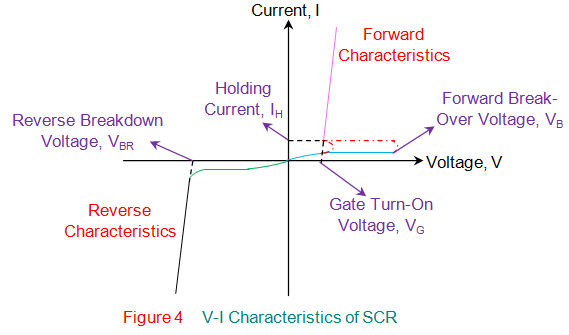 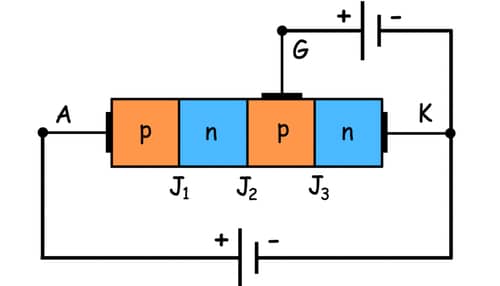 In the first case, the increase in the applied bias causes the initially reverse biased junction J2 to break down at the point corresponding to forward Break Over Voltage, VB. This results in the sudden increase in the current flowing through the SCR as shown by the pink curve in the characteristic curve, although the gate terminal of the SCR remains unbiased.

However, SCR can also be turned on at a much smaller voltage level by proving small positive voltage at the gate terminal. The reason behind this can be better understood by considering the transistor equivalent circuit of the SCR shown in the figure below. 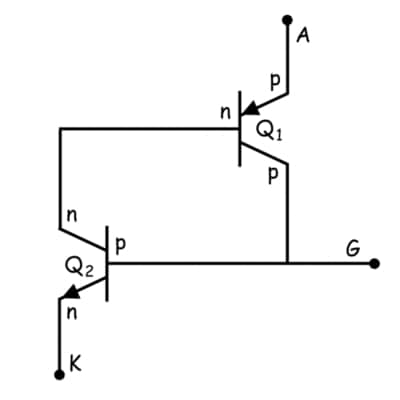 This causes either transistor to get saturated at a very rapid rate and the action cannot be stopped even by removing the bias applied at the gate terminal, provided the current through the SCR is greater than that of the Latching current. Here the latching current is defined as the minimum current required to maintain the SCR in conducting state even after the gate pulse is removed.

In such state, the SCR is said to be latched and there will be no means to limit the current through the device, unless by using an external impedance in the circuit. This necessitates one to resort for different techniques like Natural Commutation, Forced Commutation or Reverse Bias Turn Off and Gate Turn-Off to switch OFF a conducting SCR.

Basically, all of these techniques aim at reducing the anode current below the Holding Current. Holding current is defined as the minimum current to maintain the SCR in its conducting mode.