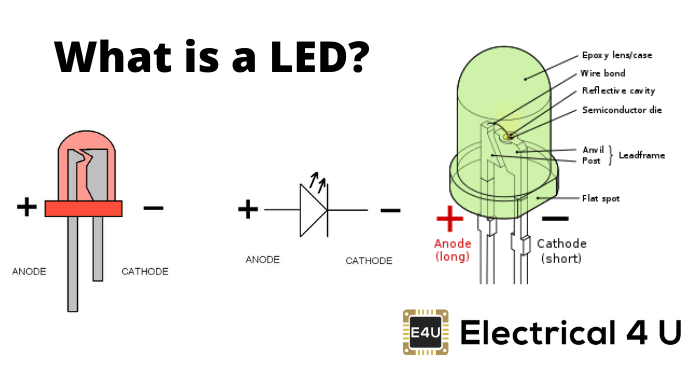 What is a Light Emitting Diode (LED)?

A Light Emitting Diode (LED) is a special type of PN junction diode. The light emitting diode is specially doped and made of a special type of semiconductor. This diode can emit light when it is in the forward biased state. Aluminum indium gallium phosphide (AlInGaP) and indium gallium nitride (InGaN) are two of the most commonly used semiconductors for LED technologies.

The doping is typically carried out with elements from column III and V of the periodic table. When a forward biased current, IF, energizes the p-n junction, it emits light at a wavelength defined by the active region energy gap, Eg. 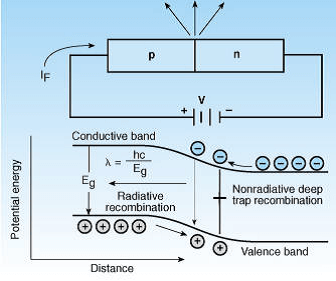 How Does a Light Emitting Diode (LED) Work?

The efficacy depends on the light energy generated at the junction and losses due to re-absorption when light tries to escape through the crystal. The high index of refraction of most semiconductors causes the light to reflect back from the surface into the crystal and highly attenuated before finally exiting. The efficacy expressed in terms of this ultimate measurable visible energy is called the external efficacy.

The phenomenon of electroluminescence was observed in the year 1923 in naturally occurring junctions, but it was impractical at that time due to its low luminous efficacy in converting electric energy to light. But, today efficacy has increased considerably and LEDs are used not only in signals, indicators, signs, and displays but also in indoor lighting applications and road lighting applications.

Color of an LED 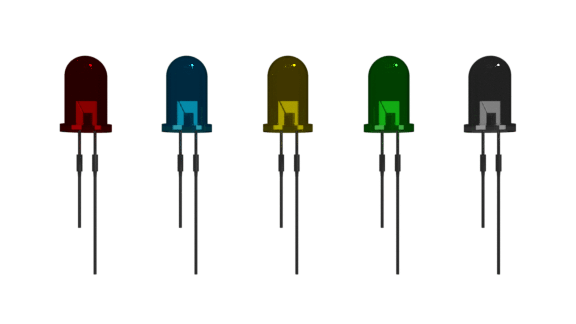 If you’re looking to use colored LEDs for an electronics project, the best Arduino starter kits include a variety of colored LEDs.

LEDs may be dimmed to give 10% of their rated light output by reducing the drive current. LEDs are generally dimmed using Pulse Width Modulation techniques.

The rated maximum junction temperature (TJMAX) is the most critical parameter for an LED. Temperatures exceeding this value usually result in damage of the plastic encapsulated LED device. Mean Time Between Failures (MTBF) is used to find out the average life for LED. MTBF is determined by operating a quantity of LED devices at rated current in an ambient temperature of 55°C and recording when half the devices fail.

White LEDs are being manufactured now using two methods: In the first method red, green, and blue LED chips are combined in the same package to produce white light; In the second method phosphorescence is used. Fluorescence in the phosphor that is encapsulated in the epoxy surrounding the LED chip is activated by the short-wavelength energy from the InGaN LED device.

Luminous efficacy of LED is defined as the emitted luminous flux (in lm) per unit electrical power consumed (in W). Blue LEDs have a rated internal efficacy in the order of 75 lm/W; red LEDs, approximately 155 lm/W; and amber LEDs, 500 lm/W. Taking into consideration losses due to internal re-absorption, the luminous efficacy is on the order of 20 to 25 lm/W for amber and green LEDs. This definition of efficacy is called external efficacy and is analogous to the definition of efficacy typically used for other light source types.