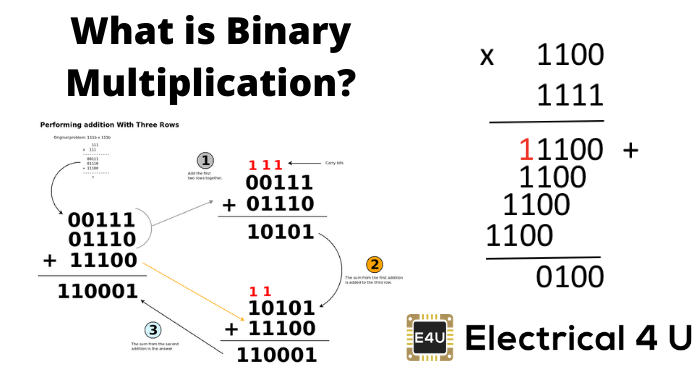 How to Multiply Binary Numbers

Binary addition, binary subtraction, binary multiplication and binary division are the four types of arithmetic operations that occur in the binary arithmetic.

We have already discussed the binary addition and binary subtraction in detail in the previous articles now we are going to discuss binary multiplication in a detailed manner.

As in binary number system, there are only 0 and 1 present as digits so we have to know the fundamental interrelation between these two digits during multiplication.

Like in the case of binary addition, in binary multiplication there are also four steps to be followed during a bigger multiplication or we can say these fundamental steps as well. These are:

As we can see that if we can compare these rules of binary multiplication with that of decimal multiplication we will not have any difference at all. So it is a comparatively easy method than the previously discussed two operations.
Now we will look into the procedure in a more detailed matter and step by step to understand it better.

This is the first step in this step the least significant bit or the right most bit of B is multiplied with all the digits of A from the right side and the result is written.
Here the steps took place are

In this step the left most digit of B which is 1 is multiplied by all the digits of A and the result is same as that of the first step.