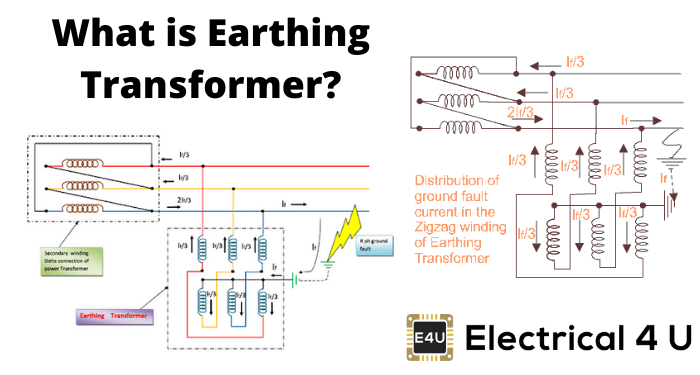 If the earthing transformer on the Delta Side is outsides the Zone of protection the Earth Fault(E/F) in the delta system outside Current Transformer (CT) locations would produce current distributions as shown which circulate within the differential CT secondaries and is kept out of operating coils.
Zig-Zag or inter connected star grounding transformer has normal magnetising impedance of high value but for E/F, currents flow in windings of the same – core in such a manner that the ampere turn cancel and hence offer lower impedance.

In normal condition of the system, the voltage across the winding of the earthing transformer is 1/√3 times of rated per phase voltage of the system.

But when single line to ground fault occurs on any phase of the system, as shown in the figure, zero sequence component of the earth fault current flows in the earth and returns to the electrical power system by way of earth star point of the earthing transformer. It gets divided equally in all the three phases. Hence, as shown in the figure, the currents in the two different halves of two windings in the same limb of the core flow in opposite directions. And therefore the magnetic flux set up by these two currents will oppose and neutralize each other. As there is no increase in flux due to fault current, there is no change of dφ/dt means no choking effect occurs to impede the flow of fault current. So it can be concluded like that, the zigzag type earthing or grounding transformer maintains the rated supply voltage at normal current as well as when a solid single line to ground fault current flows through it.