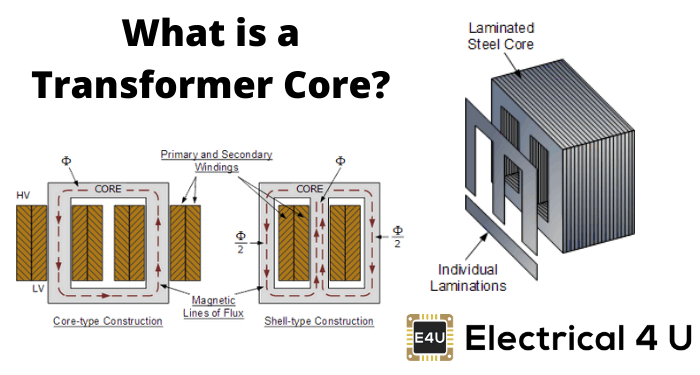 Influence of Diameter of Transformer Core

Let us consider, the diameter of the transformer core be ′D′.
Then, the cross-sectional area of the core,

Where, Bm is the maximum flux density of the core.

The main problem with the transformer core is its hysteresis and eddy current losses. Hysteresis loss in transformer mainly depends upon its core materials. It is found that, a small quantity of silicon alloyed with low carbon content steel produces material for transformer core, which has low hysteresis loss and high permeability. Because of increasing demand of power, it is required to further reduce the core losses and for that, another technique is employed on steel, which is known as cold rolling. This technique arranges the orientation of grain in ferromagnetic steel in the direction of rolling.

The core steel which has undergone through both the silicon alloying and cold rolling treatments is commonly known as CRGOS or Cold Rolled Grain Oriented Silicon Steel. This material is now universally used for manufacturing transformer core.

Although this material has low specific iron loss but still; it has some disadvantages, like, it is susceptible to increase loss due to flux flow in direction other than grain orientation and it also susceptible to impaired performance due to impact of bending and blanking the cutting CRGOS sheet. Both the surfaces of the sheet are provided with an insulating of oxide coating.

The ideal shape of cross-section of a transformer core is circular. For making perfect circular cross section, each and every successive lamination steel sheet should be cut in different dimension and size. This is absolutely uneconomical for practical manufacturing. In reality, manufacturers use different groups or packets of predefined number of same dimension lamination sheets. The group or packet is a block of laminated sheets with a predefined optimum height (thickness). The core is an assembly of these blocks in such a successive manner as per their size from core central line, that it gives an optimum circular shape of the cross-section. Such typical cross-section is shown in the figure below.

Oil ducts are needed for cooling the core. Cooling ducts are necessary because hot-spot temperature may rise dangerously high and their number depends on the core diameter and materials that get used for core. In addition to that, clamp plates made of steel are needed on either sides of the core to clamp the lamination. The steel sheet lamination blocks, oil ducts, and clamping plates; all should lie within the peripheral of optimum core circle.
The net sectional area is calculated from the dimensions of various packets and allowance is made for the space lost between lamination (known as stacking factor) for which steel sheet of 0.28 mm thickness with insulation coating is approximately 0.96. Area is also deducted for oil ducts. The ratio of net cross sectional area of core to the gross cross-sectional area inside the imaginary peripheral circle is known as Utilization factor of transformer core. Increasing numbers of steps improve the Utilization factor but at the same time, it increases manufacturing cost. Optimum numbers of steps are between 6 (for smaller diameter) to 15 (larger diameter).

During core manufacturing of a transformer core, the main factors that are taken into consideration,

Corner Jointing of Limbs with Yokes

Core losses in transformer happen mainly due to,

Interleaved joint in transformer core is the simplest form of joints. This joint is shown in the figure. The flux leaves and enters at the joint in perpendicular to grain orientation. Hence cross grain losses are high in this type of joints. But considering the low manufacturing cost, it is preferable to use in small rating transformer.

Here the lamination’s are cut at 45o. The limbs and yoke lamination edges are placed face to face at the Mitred joints in a transformer core. Here the flux enters and leaves the lamination, gets a smooth path in the direction of its flow; hence, cross grain loss is minimum here. However, it involves increased manufacturing costs. It is preferable to use in types of transformers where loss minimization is the main criteria in designing of a transformer core.