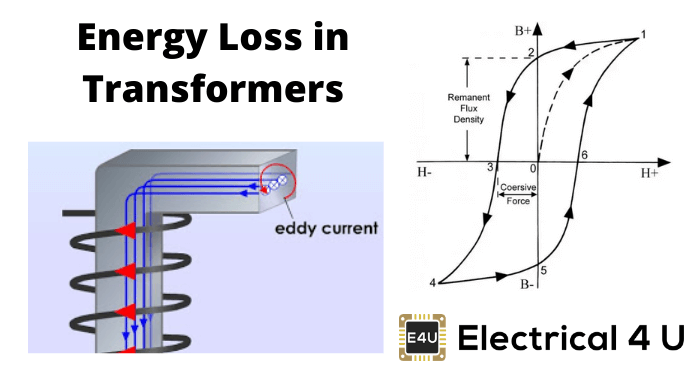 Eddy current loss in transformer is denoted as,

Copper loss can simply be denoted as,

IL2R2′ + Stray loss
Where, IL = I2 = load of transformer, and R2′ is the resistance of transformer referred to secondary.
Now we will discuss Hysteresis loss and Eddy current loss in little bit more details for better understanding the topic of losses in transformers.

Hysteresis loss in transformers can be explained in different ways. We will discuss two of them, one is the physical explanation, and the other is the mathematical explanation.

The magnetic core of transformer is made of ′Cold Rolled Grain Oriented Silicon Steel′. Steel is very good ferromagnetic material. This kind of materials is very sensitive to be magnetized. That means, whenever magnetic flux would pass through, it will behave like magnet. Ferromagnetic substances have numbers of domains in their structure. Domains are very small regions in the material structure, where all the dipoles are paralleled to the same direction. In other words, the domains are like small permanent magnets situated randomly in the structure of the substance. These domains are arranged inside the material structure in such a random manner, that net resultant magnetic field of the said material is zero. Whenever the external magnetic field or mmf is applied to that substance, these randomly directed domains get arranged themselves in parallel to the axis of applied mmf. After removing this external mmf, maximum numbers of domains again come to random positions, but some of them still remain in their changed position. Because of these unchanged domains, the substance becomes slightly magnetized permanently. This magnetism is called “Spontaneous Magnetism”. To neutralize this magnetism, some opposite mmf is required to be applied. The magnetomotive force or mmf applied in the transformer core is alternating. For every cycle due to this domain reversal, there will be extra work done. For this reason, there will be a consumption of electrical energy which is known as Hysteresis loss of transformer.

Consider a ring of a ferromagnetic specimen of circumference L meter, cross-sectional area a m2 and N turns of insulated wire as shown in the picture beside,

Let us consider, the current flowing through the coil is I amp,
Magnetizing force,

Let, the flux density at this instant is B,
Therefore, total flux through the ring, Φ = BXa Wb
As the current flowing through the solenoid is alternating, the flux produced in the iron ring is also alternating in nature, so the emf (e′) induced will be expressed as,

According to Lenz,s law this induced emf will oppose the flow of current, therefore, in order to maintain the current I in the coil, the source must supply an equal and opposite emf. Hence applied emf,

Energy consumed in short time dt, during which the flux density has changed,

Thus, total work done or energy consumed during one complete cycle of magnetism is,

Now aL is the volume of the ring and H.dB is the area of the elementary strip of B – H curve shown in the figure above,

What is Eddy Current Loss?