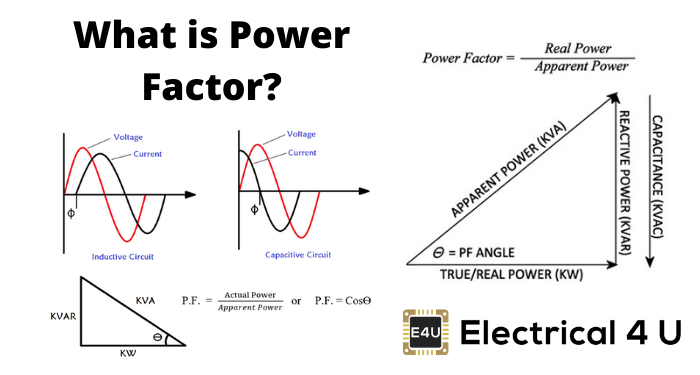 What is Power Factor?

The “ideal” power factor is one (also referred to as “unity”). This is when there is no reactive power through the circuit, and hence apparent power (kVA) is equal to real power (kW). A load with a power factor of 1 is the most efficient loading of the supply.

To help explain this better, let’s take a step back and talk about what power is.

Power is the capacity to do work. In the electrical domain, electrical power is the amount of electrical energy that can be transferred to some other form (heat, light, etc) per unit of time.

Mathematically power factor is the product of voltage drop across the element and current flowing through it.

Considering first the DC circuits, having only DC voltage sources, the inductors and capacitors behave as short circuits and open circuits respectively in steady-state.

Now coming to the AC circuit, here both inductor and capacitor offer a certain amount of impedance given by:

Hence when we consider the entire circuit consisting of a resistor, inductor, and capacitor, there exists some phase difference between the source voltage and current.

The cosine of this phase difference is called the electrical power factor. This factor (-1 < cosφ < 1 ) represents the fraction of the total power that is used to do the useful work.

The other fraction of electrical power is stored in the form of magnetic energy or electrostatic energy in the inductor and capacitor respectively.

The total power in this case is:

This is called apparent power and its unit is VA (Volt-Amp) and denoted by ‘S’. A fraction of this total electrical power that does our useful work is called active power. We denote it as ‘P’.

The other fraction of power is called reactive power. Reactive power does no useful work, but it is required for the active work to be done. We denote it with ‘Q’ and mathematically is given by:

Q = Reactive power = Total electrical power.sinφ and its unit is VAR (Volt-Amp Reactive). This reactive power oscillates between source and load. To help understand this better all these power are represented in the form of a triangle.

The term power factor comes into the picture in AC circuits only. Mathematically it is the cosine of the phase difference between the source voltage and current. It refers to the fraction of total power (apparent power) which is utilized to do the useful work called active power.

Hence, the size and cost of the machine are also reduced.

This is why the electrical power factor should be maintained close to unity – it is significantly cheaper.

There are three main ways to improve power factor:

Improving power factor means reducing the phase difference between voltage and current. Since the majority of loads are of inductive nature, they require some amount of reactive power for them to function.

Capacitor banks reduce the phase difference between the voltage and current.

Synchronous condensers are 3 phase synchronous motors with no load attached to their shaft.

The synchronous motor has the characteristics of operating under any power factor leading, lagging, or unity depending upon the excitation. For inductive loads, a synchronous condenser is connected towards the load side and is overexcited.

Synchronous condensers make it behave like a capacitor. It draws the lagging current from the supply or supplies the reactive power.

This is an AC exciter mainly used to improve the PF of an induction motor.

They are mounted on the shaft of the motor and are connected to the rotor circuit of the motor. It improves the power factor by providing the exciting ampere turns to produce the required flux at the given slip frequency.

Further, if ampere-turns increase, it can be made to operate at the leading power factor.

In power factor calculation, we measure the source voltage and current drawn using a voltmeter and ammeter respectively. A wattmeter is used to get the active power.

Hence, we can get the electrical power factor.

Now we can calculate the reactive power Q = VIsinφ VAR

IMPORTANT: In power factor improvement, the reactive power requirement by the load does not change. It is just supplied by other devices, thus reducing the burden on the source to provide the required reactive power.