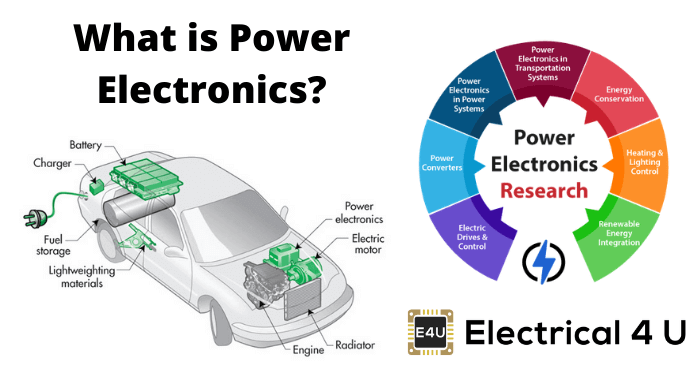 Power electronics is one of the contemporary subjects of electrical engineering which has seen a lot of advancements in recent times and has impacted human life in almost every sphere. We over selves use so many power electronic applications in our daily life, without even realizing t. Now the question stands as, “what is power electronics?”

We can define power electronics as a subject which is a hybrid of power engineering, analogue electronics, semiconductor devices and control systems. We derive the fundamentals of each subject and apply it in an amalgamated way so as to get a regulated form of electrical energy. Electrical energy in itself is not usable until it is converted into a tangible form of energy such as motion, light, sound, heat etc. In order to regulate these forms of energy, an effective way is to regulate the electrical energy itself and this forms the content of the subject power electronics.

We can trace the overwhelming advancement in the subject back to the development of commercial thyristors or silicon controlled rectifiers (SCR) by General Electric Co. in 1958. Before this the control of electrical energy was mainly done using thyratrons and mercury arc rectifiers which works on the principle of physical phenomena in gases and vapours.

After SCR, a great many power electronic devices have emerged like GTO, IGBT, SIT, MCT, TRIAC, DIAC, IEGT, IGCT and so on. These devices are rated for several hundreds of volt and ampere unlike the signal level devices which work at few volts and mill amperes.

In order to achieve the purpose of power electronics, the devices are made to work as nothing more than a switch. All the power electronic devices act as a switch and have two modes, i.e. ON and OFF.

For example, a BJT (Bipolar Junction Transistor) has three regions of operation in its output characteristics cut-off, active and saturation. In analogue electronics where the BJT is supposed to work as an amplifier, the circuit is so designed to bias it in active region of operation. However in power electronics BJT will work in cutoff region when it is OFF and in saturation region when it is ON.

Now since in both the mode either of the quantity V or I is zero, the switch power also turns out to be zero always. This characteristic is easy to visualize in a mechanical switch and the same has to be followed in power electronic switch also.

However practically there always exists a leakage current through the devices when in OFF condition, i.e Ileakage ≠ 0 and there is always a forward voltage drop in ON condition, i.e Von ≠ 0. However the magnitude of Von or Ileakage is very less and hence the power across the device is also very less, in order of few millwatts.

This power is dissipated in the device and hence proper heat evacuation from the device is an important aspect. Apart from this ON state and OFF state losses, there are switching losses also in power electronic devices. This is mainly while the switch toggles from one mode to another and V and I across the device changes. In power electronics both the losses are important parameters of any device and essential in determining its voltage and current ratings. 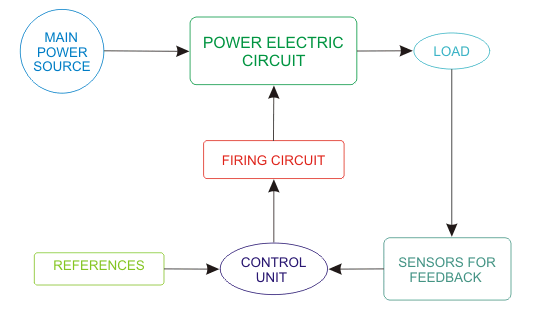 The Control Unit takes the output feedback from sensors and compares it with references and accordingly gives input to the firing circuit. Firing circuit is basically a pulse generating circuit which gives pulse output in a fashion so as to control the power electronic switches in the main circuit block.

The net result is that the load receives the desired electrical power and hence delivers the desired result. A typical example of the above system would be speed control of motors. You can learn more about power electronics by studying our basic electronics questions.

Majorly there are five types of power electronic circuits, each having different purpose-

There is a common misconception about the term converter. Converter is basically any circuit that converts electrical power from one form to another. Above we have explorerd the five different types of converters.