Therefore, it requires a significant amount of energy to shift an electron from valence to conduction band. Thus, insulators are poor conductors of electricity. Mica and Ceramic are the well-known examples of insulation material. Semiconductors, on the other hand, have an energy gap which is in between that of conductors and insulators.

This gap is typically more or less 1 eV, and thus, one electron requires energy more than conductors but less than insulating materials for shifting valence band to conduction band. At low temperature there are very less number of electrons in conduction band in a semiconductor crystal but when the temperature is increased more and more electrons get sufficient energy to migrate from valence band to conduction band. Because of that, they don’t conduct electricity at low temperature but as the temperature increases the conductivity increases. The most typical examples of the semiconductors are silicon and germanium.

Thus, the definition of semiconductor can be as follows.

The materials that are neither conductor nor insulator with energy gap of about 1 eV (electron volt) are called semiconductors.

Most common materials commercially used as semiconductors are germanium (Ge) and silicon (Si) because of their property to withstand high temperature. That means there will be no significant change in energy gap with changing temperature.

The relation between energy gap and absolute temperature for Si and Ge are given as,

At room temperature resistivity of semiconductor is in between insulators and conductors. Semiconductors show negative temperature coefficient of resistivity that means its resistance decreases with increase in temperature. Both Si and Ge are elements of IV group, i.e. both elements have four valence electrons. Both form the covalent bond with the neighboring atom. At absolute zero temperature both behave like an insulator, i.e. the valence band is full while conduction band is empty but as the temperature is raised more and more covalent bonds break and electrons are set free and jump to the conduction band.

In the above energy band diagrams of a semiconductor. CB is the conduction band, and VB is the valence band. At 0oK, the VB is full with all the valence electrons.

Where, n0 is a constant, T is the absolute temperature, VG is the semiconductor band gap voltage, and VT is the thermal voltage.
The thermal voltage is related to the temperature by VT = kT/q
Where, k is the Boltzmann constant (k = 1.381 × 10 − 23 J/K).
In intrinsic semiconductors conductivity (σ) is determined by both electrons (σe) and holes (σh) and depends on the carrier density.
σe = neμe, σh = peμh
Conductivity, 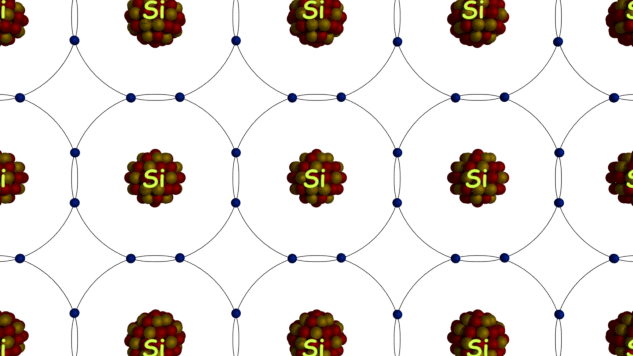 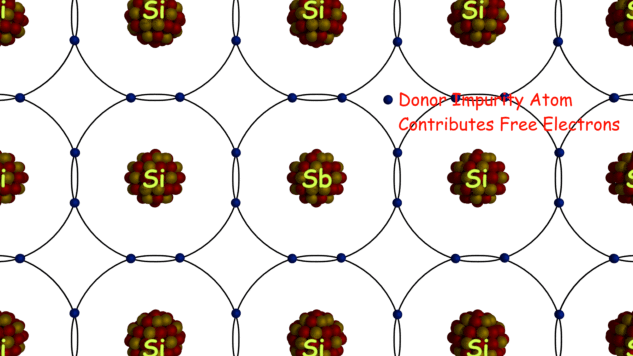 Four of the five valence electron of pentavalent impurity forms covalent bond with Si atom and the remaining electron is free to move anywhere within the crystal. Pentavalent impurity donates electron to Si that’s why N-type impurity atoms are known as donor atoms. This enhances the conductivity of pure Si. Majority carriers are electrons therefore conductivitry is due to these electrons only and is given by,
σ = neμe 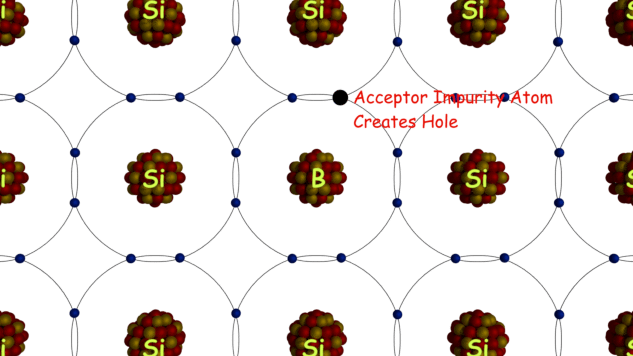 Three of the four valence electron of tetravalent impurity forms covalent bonds with Si atoms. The phenomenon creates a space which we refer to a hole. When the temperature rises an electron from another covalent bond jumps to fill this space. Hence, a hole gets created behind. In this way conduction takes place. P-type impurity accepts electrons and is called acceptor atom. Majority carriers are holes, and therefore conductivity is due to these holes only and is given by,
σ = neμh