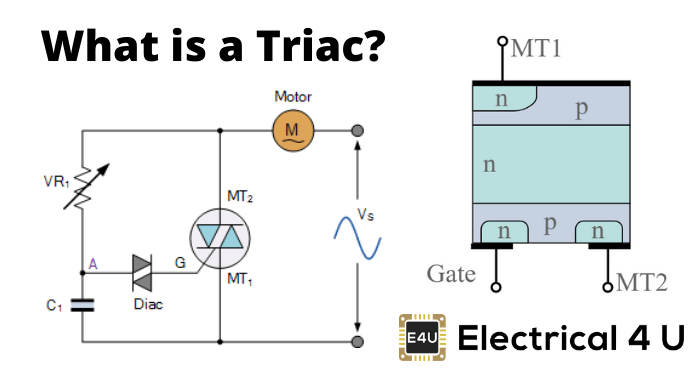 What is a Triac?

A Triac is defined as a three terminal AC switch which is different from the other silicon controlled rectifiers in the sense that it can conduct in both the directions that is whether the applied gate signal is positive or negative, it will conduct. Thus, this device can be used for AC systems as a switch.

This is a three terminal, four layer, bi-directional semiconductor device that controls AC power. The triac of maximum rating of 16 kw is available in the market.

Figure shows the symbol of triac, which has two main terminals MT1 and MT2 connected in inverse parallel and a gate terminal.

Figure shows the construction of a triac. There are two main terminals namely MT1 and MT2 and the remaining terminal is gate terminal.

Characteristics of a Triac

The triac characteristics is similar to SCR but it is applicable to both positive and negative triac voltages. The operation can be summarized as follows-

Voltage of terminal 1 is positive with respect to terminal 2 and the gate voltage is negative.

Voltage of terminal 2 is negative with respect to terminal 1 and gate voltage is positive.

When the device gets turned on, a heavy current flows through it which may damage the device, hence in order to limit the current a current limiting resistor should be connected externally to it. By applying proper gate signal, firing angle of the device may be controlled. The gate triggering circuits should be used for proper gate triggering. We can use diac for triggering the gate pulse. For firing of the device with proper firing angle, a gate pulse may be applied up to a duration of 35 micro seconds.