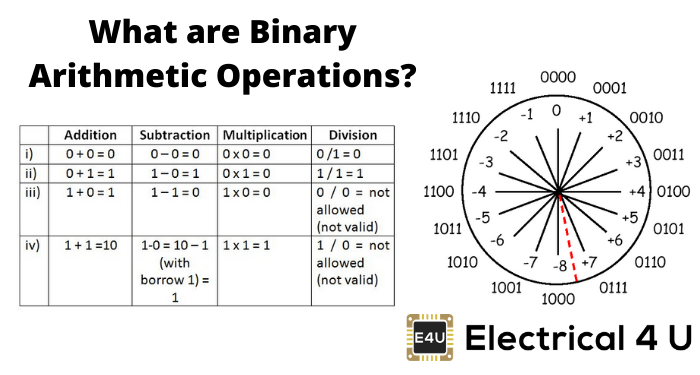 In the binary number system, there are only two digits—0 and 1—and any number can be represented by these two digits. The arithmetic of binary numbers involves binary addition, binary subtraction, binary multiplication, or binary division.

Binary arithmetic operation starts from the least significant bit i.e. from the rightmost side. We will discuss the different operations one by one in the following article.

There are four steps in binary addition, they are written below

The above example of binary arithmetic clearly explains the binary addition operation, the carried 1 is shown on the upper side of the operands.

Here are too four simple steps to keep in memory

Binary multiplication may sound like it would be more difficult than binary addition or subtraction – but is actually a simple process. Here are the four steps to be followed, using the same binary numbers 10001001 and 10010101:

The arithmetic of multiplying binary numbers is shown below:

Binary division is comprised of other two binary arithmetic operations, multiplication and subtraction; an example will explain the operation more easily.

Here 101 is the quotient and 1 is the remainder.