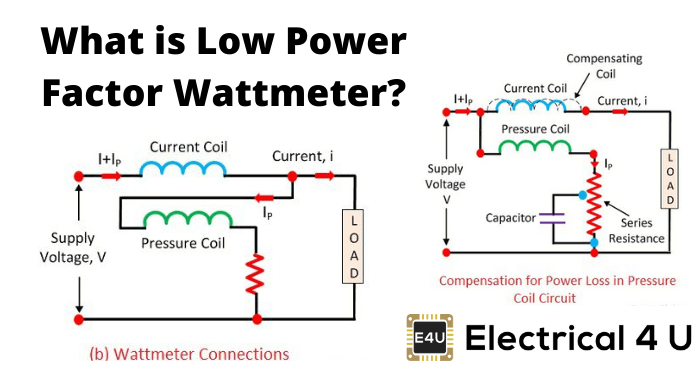 What is a Low Power Factor Wattmeter?

The answer is simple: a standard wattmeter gives inaccurate results.

Now there are two main situations where we should not use an ordinary wattmeter in measuring a low power factor:

The above two reasons give very inaccurate results thus we should not use normal or ordinary watt meters in measuring the low value of the power factor.

Here we are going to discuss, where we need to do the modification. These are discussed one by one below:

(1) The electrical resistance of the ordinary wattmeter’s pressure coil is reduced to a low value such that current in the pressure coil circuit is increased, thus it leads to. In this category two cases, diagrams arise and these are shown below:

In the second category, the current coil is not in series with the load and the voltage across the pressure coil is not equal to the applied voltage.

From the above discussion, we conclude that in both cases we have some amount of errors hence there is a need to do some modification in the above circuits to have minimum error.

The modified circuit is shown below:
We have used here a special coil called compensating coil, it carries a current equal to the sum of two currents i.e load current plus pressure coil current.

Thus the net field is due to the current I only. Hence in this way errors caused by pressure coil can be neutralized.

(2) We require compensating coil in the circuit in order to make the low power factor meter. It is the second modification that we have discussed in detail above.

(3) Now the third point deals with the compensation of the inductance of the pressure coil, which can be achieved by doing modification in the above circuit.

If we consider the inductance of the pressure coil we don’t have voltage across pressure in phase with the applied voltage.

Hence in that case it lags by an angle

Where, Rp is (rp+R) and x is angle. If we ignore the effect of the inductance of pressure i.e putting b = 0 we have expression for true power as

On taking the ratio of equations (2) and (1) we have an expression for correction factor as written below:

And from this correction factor error can be calculated as

On substituting the value of correction factor and taking suitable approximation we have an expression for error as VIsin(A)*tan(b). 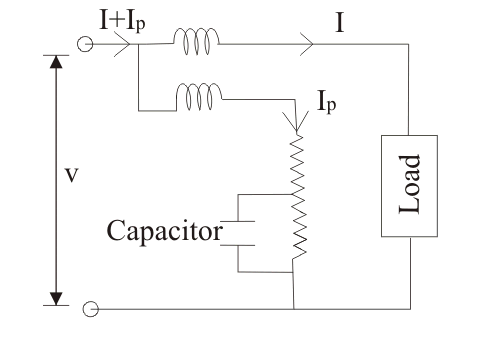 Now we know that the error caused by pressure coil inductance is given by the expression e = VIsin(A) tan(b), if the power factor is low (i.e in our case the value of φ is large hence we have a large error).

Thus in order to avoid this situation, we have connected the variable series resistance with a capacitor as shown in the above figure.

This final modified circuit so obtained is called the low power factor meter.

A modern low power factor meter is designed such that it gives high accuracy while measuring power factors even lower than 0.1.