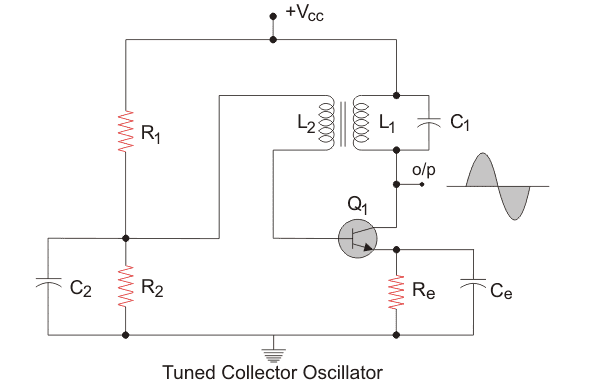 Above is the circuit diagram of the tuned collector oscillator. As you can see, the transformer and the capacitor is connected to the collector side of the transistor. The oscillator here produces a sine wave.
R1 and R2 form the voltage divider bias for the transistor. Re refers to the emitter resistor and is there to provide thermal stability. Ce is used to bypass the amplified ac oscillations and is the emitter bypass capacitor. C2 is the bypass capacitor for resistor R2. The primary of the transformer, L1 along with capacitor C1 forms the tank circuit.

Before we go into the working of the oscillator, let us just revise the fact that a transistor causes a phase shift of 180 degrees when it amplifies an input voltage. L1 and C1 form the tank circuit and it is from these two elements, we will get the oscillations. The transformer helps in giving a positive feedback(We will come back to this later) and the transistor amplifies the output. With that established, let us now proceed to understand the working of the circuit.

The Coil L2 gets charged through electromagnetic induction and feeds this to the transistor. The transistors amplify the signal, which is taken as the output. Part of the output is fed back to the system in what is known as positive feedback.
Positive feedback is the feedback which is in phase with the input. The transformer introduces a phase shift of 180 degrees and the transistor also introduces a phase shift of 180 degrees too. So in total, we get a 360-degree phase shift and this is fed back to the tank circuit. Positive feedback is necessary for sustained oscillations.
The frequency of oscillation depends on the value of the inductor and capacitor used in the tank circuit and is given by: