Current flows from high voltage point to low voltage point due to the potential difference between them. Here, electrical polarity comes into the picture. Electrical polarity simply describes the direction of the current flow. When we look into DC system, we find that one pole is always positive and the other one is always negative that imply that the current flows in one direction only. But when we look into an AC system, the terminals are changing their polarity periodically, and the direction of the current also changes accordingly.

We use dot convention to identify the voltage polarity of the mutual inductance of two windings. The two used conventions are:

When we look into the operations of the distribution transformers, we find that they need to work all the time and also need to supply at high demand at peak times. So, to cope up with these situations, we connect the transformers in parallel.

Paralleling is done by connecting same polarity terminals of the primary winding together. A similar procedure is done for the secondary winding. Paralleling will increase the power supplying capacity and also the reliability of the system. 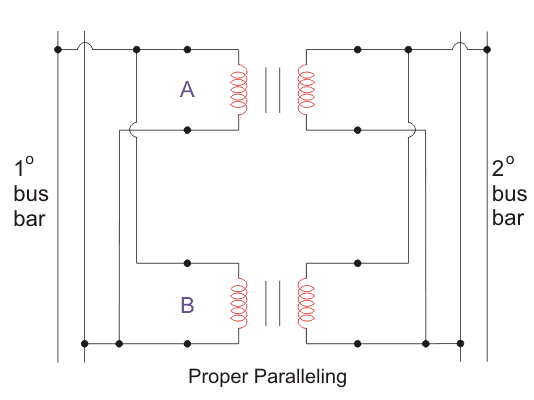 We do polarity test on parallel transformers to ensure that we connect the same polarity windings and not the opposite ones. If we accidentally connect the opposite polarities of the windings, it will result in a short-circuit and eventually damage the machine. 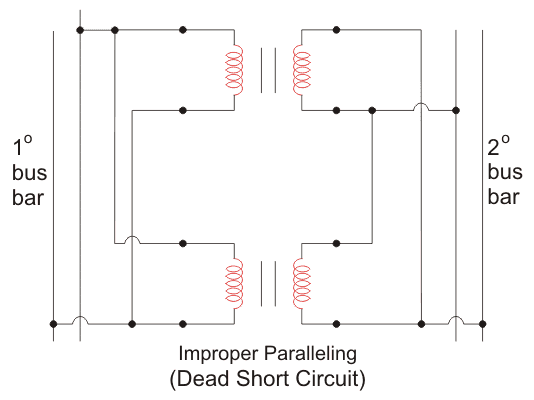 We can categorise the polarity of the transformer to two types, 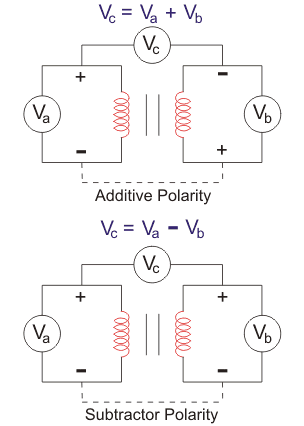 In additive polarity, the voltage (Vc) between the primary side (Va) and the secondary side (Vb) will be the sum of both high voltage and the low voltage, i.e. we will get Vc = Va + Vb

In subtractive polarity, the voltage (Vc) between the primary side (Va) and the secondary side (Vb) will be the difference of both high voltage and the low voltage, i.e. we will get Vc = Va – Vb

Procedure of Polarity Test of Transformer