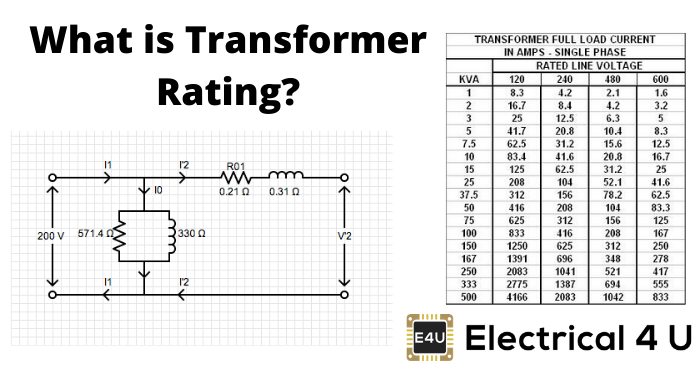 What is a Transformer Rating?

The rating of a transformer depends upon temperature rise, which depends on the transformer’s losses. However, the temperature can be maintained within permissible limits by using the proper cooling system.

In a transformer, there are two main types of losses:

As losses are independent of the power factor of load, the rating of the transformer is also independent of load and can be only decided based on losses.

That’s why the transformer is generally specified with apparent power rating (VA or kVA) and not in kW.

Lets us take an example, a transformer working on rated voltage and rated current with load power factor equal to zero; as load power factor is zero, it will deliver zero power to load, but it has rated kVA output. Hence rating must be expressed in kVA.

As the transformer runs on very high efficiency, its losses can be neglected and hence rated input in kVA at the primary = rated output in kVA at secondary.

We can say that rated kVA marked on the nameplate of the transformer refers to both the windings. i.e. kVA rating for both the primary and secondary winding is the same.

The kVA rating mentioned on the transformer’s nameplate is load side kVA but only at full load condition.