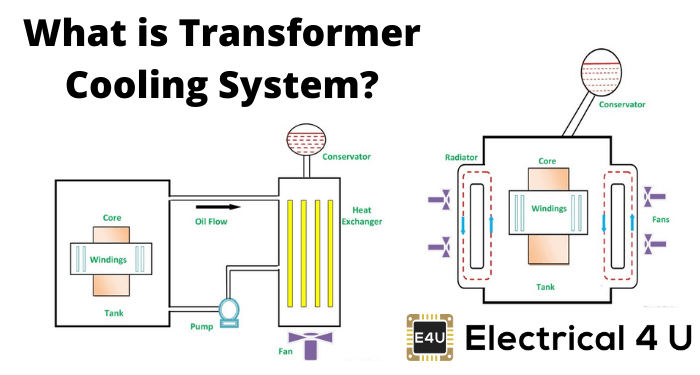 For accelerating cooling different transformer cooling methods are used depending upon their size and ratings. We will discuss these one by one below,

Heat dissipation can obviously be increased, if dissipating surface is increased but it can be make further faster by applying forced air flow on that dissipating surface. Fans blowing air on cooling surface is employed. Forced air takes away the heat from the surface of radiator and provides better cooling than natural air. The full form of ONAF is “Oil Natural Air Forced”. As the heat dissipation rate is faster and more in ONAF transformer cooling method than ONAN cooling system, electrical power transformer can be put into more load without crossing the permissible temperature limits.

In oil forced air natural cooling system of transformer, the heat dissipation is accelerated by using forced air on the dissipating surface but circulation of the hot oil in transformer tank is natural convectional flow.

The heat dissipation rate can be still increased further if this oil circulation is accelerated by applying some force. In OFAF cooling system the oil is forced to circulate within the closed loop of transformer tank by means of oil pumps. OFAF means “Oil Forced Air Forced” cooling methods of transformer. The main advantage of this system is that it is compact system and for same cooling capacity OFAF occupies much less space than farmer two systems of transformer cooling. Actually in oil natural cooling system, the heat comes out from conducting part of the transformer is displaced from its position, in slower rate due to convectional flow of oil but in forced oil cooling system the heat is displaced from its origin as soon as it comes out in the oil, hence rate of cooling becomes faster.

We know that ambient temperature of water is much less than the atmospheric air in same weather condition. So water may be used as better heat exchanger media than air. In OFWF cooling system of transformer, the hot oil is sent to a oil to water heat exchanger by means of oil pump and there the oil is cooled by applying sowers of cold water on the heat exchanger’s oil pipes. OFWF means “Oil Forced Water Forced” cooling in transformer.