Each hole gets created from one impurity atom. So far we have explained, about the creation of holes but did not focus how a hole associated with static impurity atom can move in the crystal. But in a semiconductor crystal holes can also move like electrons but the mechanism of movement is different. When one hole that is one incomplete covalent bond created, it will not remain incomplete lifelong. 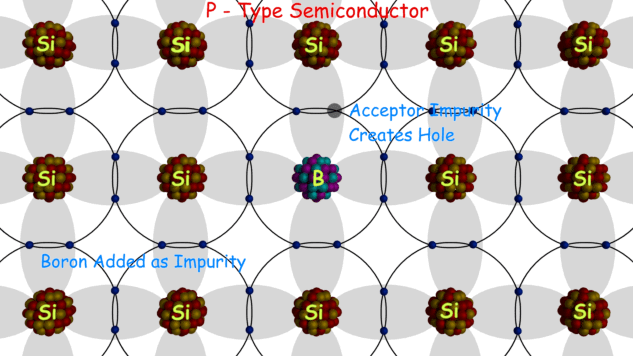 Very soon electron of other neighbouring covalent bonds breaks out and seats on that hole and makes a new covalent bond. The electron when breaks out from a covalent bond it creates a hole behind it. If we look at the matter in relevant point of view, we can say that the hole moves from its previous position to a new position.

Same things will happen at a new position of the hole, and hence, the hole will further move to another new position. That is how the holes move in a semiconductor crystal. Finally, we can say that in a p-type semiconductor has plenty of holes move randomly inside the crystal.

The trivalent impurity used for doping purpose of a p-type semiconductor are boron, gallium, and indium.