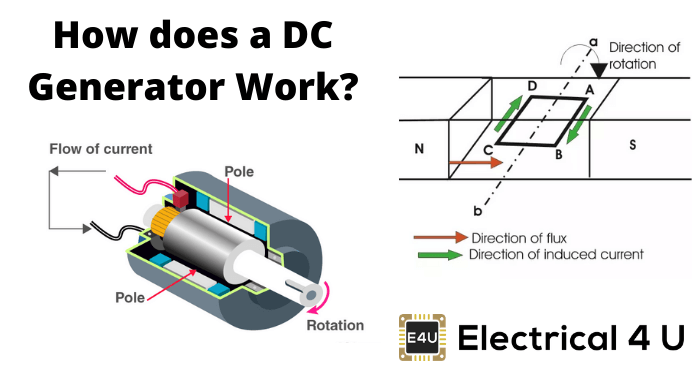 Before we can explain the working principle of a DC generator, we need to cover the basics of generators.

Both of these generators produce electrical power based on the principle of Faraday’s law of electromagnetic induction.

This law states that when a conductor moves in a magnetic field it cuts magnetic lines of force, which induces an electromagnetic force (EMF) in the conductor.

The magnitude of this induced EMF depends upon the rate of change of flux (magnetic line force) linkage with the conductor. This EMF will cause a current to flow if the conductor circuit is closed.

Hence the most basic two essential parts of a generator are:

Now that we understand the basics, we can discuss the working principle of a DC generator. You may also find it useful to learn about the types of DC generators.

In the figure above, a single loop of a conductor of rectangular shape is placed between two opposite poles of a magnet.

Let’s consider, the rectangular loop of the conductor is ABCD which rotates inside the magnetic field about its axis ab.

When the loop rotates from its vertical position to its horizontal position, it cuts the flux lines of the field. As during this movement two sides, i.e., AB and CD of the loop cut the flux lines there will be an EMF induced in both of the sides (AB and BC) of the loop.

As the loop gets closed there will be a current circulating through the loop. The direction of the current can be determined by Flemming’s right hand Rule.

At this position, the tangential motion of the sides of the loop is parallel to the flux lines of the field. Hence there will be no question of flux cutting, and consequently, there will be no current in the loop.

Here the tangential motion of the side of the loop is perpendicular to the flux lines; hence rate of flux cutting is maximum here, and according to Flemming’s right-hand Rule, at this position current flows from B to A and on another side from D to C.

If we observe this phenomenon differently, we can conclude, that each side of the loop comes in front of N pole, the current will flow through that side in the same direction, i.e., downward to the reference plane.

Similarly, each side of the loop comes in front of the S pole, the current through it flows in the same direction, i.e., upwards from the reference plane. From this, we will come to the topic of the principle of DC generator.

Now the loop is opened and connected with a split ring as shown in the figure below. Split rings, made of a conducting cylinder, get cut into two halves or segments insulated from each other.

We connect the external load terminals with two carbon brushes which rest on these split slip ring segments.

We can see that in the first half of the revolution current always flows along ABLMCD, i.e., brush no 1 in contact with segment a.

In the next half revolution, in the figure, the direction of the induced current in the coil is reversed. But at the same time the position of segments a and b are also reversed which results that brush no 1 comes in touch with segment b.

Hence, the current in the load resistance again flows from L to M. The waveform of the current through the load circuit is as shown in the figure. This current is unidirectional.

The above content is the basic working principle of the DC generator, explained by the single loop generator model.

The positions of the brushes of the DC generator are so that the change over of the segments a and b from one brush to another takes place when the plane of the rotating coil is at a right angle to the plane of the lines of force. It is to become in that position, the induced EMF in the coil is zero.