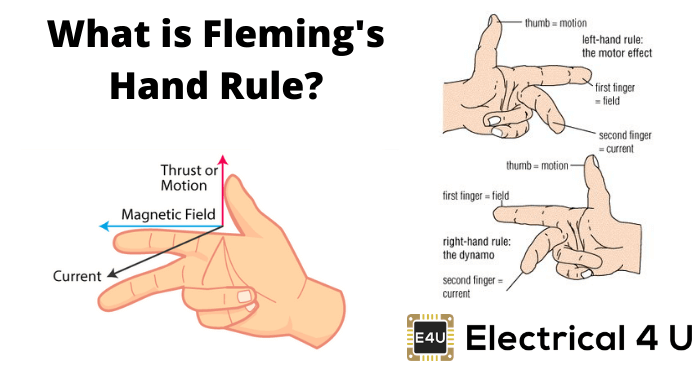 What are Fleming’s Left And Right Hand Rules?

Whenever a current carrying conductor comes under a magnetic field, there will be a force acting on the conductor. The direction of this force can be found using Fleming’s Left Hand Rule (also known as ‘Flemings left-hand rule for motors’).

Similarly if a conductor is forcefully brought under a magnetic field, there will be an induced current in that conductor. The direction of this force can be found using Fleming’s Right Hand Rule.

What is Fleming’s Left Hand Rule?

It is found that whenever a current carrying conductor is placed inside a magnetic field, a force acts on the conductor, in a direction perpendicular to both the directions of the current and the magnetic field.

In the figure below, a portion of a conductor of length ‘L’ is placed vertically in a uniform horizontal magnetic field of strength ‘H’, produced by two magnetic poles N and S. If the current ‘I’ is flowing through this conductor, the magnitude of the force acting on the conductor is:

The direction of magnetic lines of force can be determined by Maxwell’s corkscrew rule or right-hand grip rule.

As per these rules, the direction of the magnetic lines of force (or flux lines) is clockwise if the current is flowing away from the viewer, that is if the direction of current through the conductor is inward from the reference plane as shown in the figure.

We observe in the picture that the magnetic lines of force of external magnetic field are from N to S pole that is from left to right.

Hence there will be larger numbers of co-directional magnetic lines of force above the conductor than that of below the conductor.

Now if you observe the direction of the current, force and magnetic field in the above explanation, you will find that the directions are according to the Fleming left-hand rule.

What is Fleming’s Right Hand Rule?

This relation among these three directions is determined by Fleming’s right-hand Rule.

Who Invented The Left and Right Hand Thumb Rules?

The left and right hand thumb rules were founded by John Ambrose Fleming in the late 19th century.

John discovered both of these rules and named them after himself. The rules are now well known as Fleming’s left and right-hand rule.