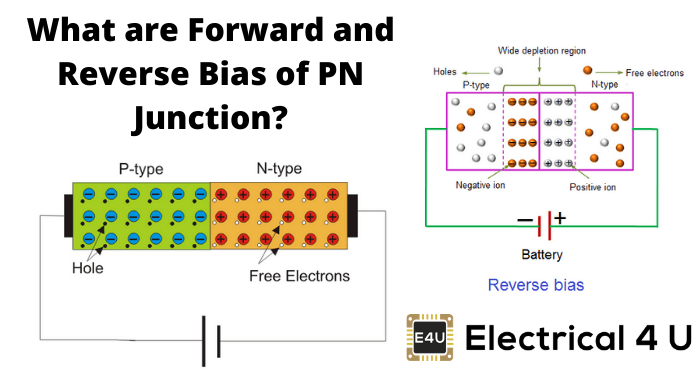 In this forward-biased condition, due to the attraction of the positive terminal of the source, electrons that participated in covalent bond creation in the p-type material will be attracted towards the terminal.

As a result, the number of covalent bonds is broken and electrons are shifted towards the positive terminal. This results in the electrons’ concentration in the crystal closer to the terminal to increase, and these electrons recombine with holes here.

Due to the higher concentration of holes adjacent to the negative impurity ions layer, the electrons of negative ions come out and recombine with those holes and create new holes in the layer. Consequently, the width of this negative ions layer is reduced, and finally, this layer vanishes. 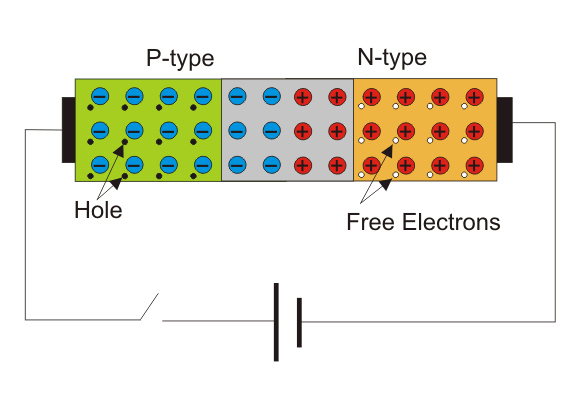 Similarly, due to the negative terminal of the source, the free electrons in the n-type region will repeal towards the junction where they will find the layer of positive impurity ions and start recombine with these ions and generate free electrons inside the layer. Consequently, the width of positive impurity ions is reduced, and finally, it vanishes.

Hence, ideally, there will be no obstruction of flowing current, and the PN junction behaves as the short circuit. 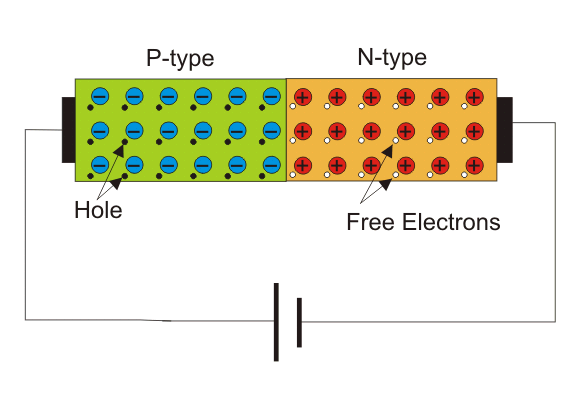 At the same time since the negative terminal of the source is connected to the p-type region of the junction, electrons are injected in this region. 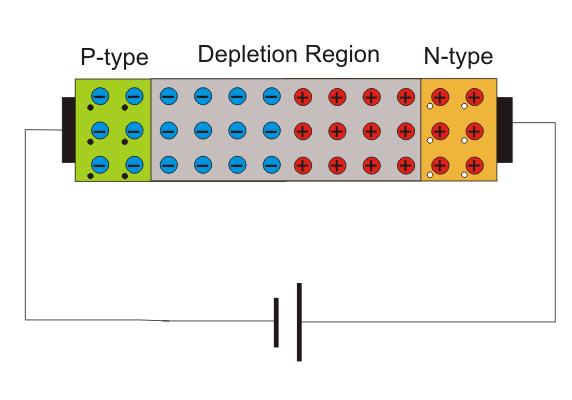 When the battery voltage is applied across the forward bias junction, a current will flow continuously through this junction.

IS is Saturation Current (10-9 to 10-18 A)
VT is Volt-equivalent temperature (= 26 mV at room temperature)
n is the Emission coefficient (1 ≤ n ≤ 2 for Si ICs)
Actually, this expression is approximated.

IS is Saturation Current (10-9 to 10-18 A)
VT is Volt-equivalent temperature (= 26 mV at room temperature)
n is the Emission coefficient (1 ≤ n ≤ 2 for Si ICs)
Actually, this expression is approximated.

A p-n junction is specified in four manners.

V-I Characteristics of A PN Junction

In the reverse bias the voltage increases in the reverse direction across the p-n junction, but no current due to the majority carriers, only a minimal leakage current flows. But at a certain reverse voltage p-n junction breaks in conduction.

From V-I characteristics of a p-n junction, it is clear that graph is not linear. The forward biased p-n junction resistance is rd ohm; it is called AC resistance or dynamic resistance. It is equivalent to the slope of voltage-current of the PN junction.

Average AC resistance is determined by the straight line drawn linking the intersection of the minimum and maximum values of the external input voltage.

It the capacitance of the diode in the forward biased condition and it is defined as the ratio of transiting charge created to the differential change in voltage.

It is the time taken by the current to decrease to reverse leakage current. This transition time can be determined by the geometry of P-N junction and concentration of the doping level.

It is the sum of the storage time and transition time. It is the time for a diode to raise applied current to get 10% of the constant state value from the reverse leakage current.