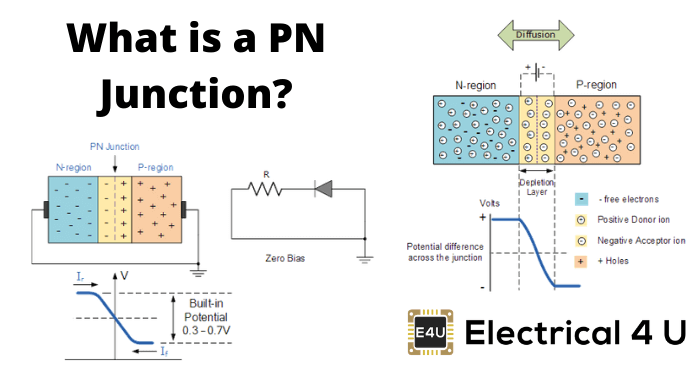 What is a PN Junction?

The middle portion of the crystal where these p-type and n-type semiconductors meet a typical junction formed which is known as P-N junction.

How to Make a PN Junction

Here we used the word ideal because we neglect here thermally generated electrons and holes in the crystal. Now if one electron seats on one hole, the impurity atom which was associated that hole now become negative ions.

Each pentavalent impurity atom in the crystal structure has one extra electron in the outermost orbit which it can easily remove as a free electron. When it removes that electron it becomes positively charged ions.

As the acceptor impurity atoms nearer the junction in the p-type region, become negative ions, there will be a layer of negative static ions in p region adjacent to the junction.

As one layer is negatively charged and other is positively charged, there will be an electrical potential across the junction, and the junction behaves like a potential barrier. The barrier potential depends on the semiconductor material, the amount of doping and temperature.

It is found that barrier potential for germanium semiconductor is 0.3 volt at 25oC, and it is for silicon semiconductor 0.7 volt at the same temperature.