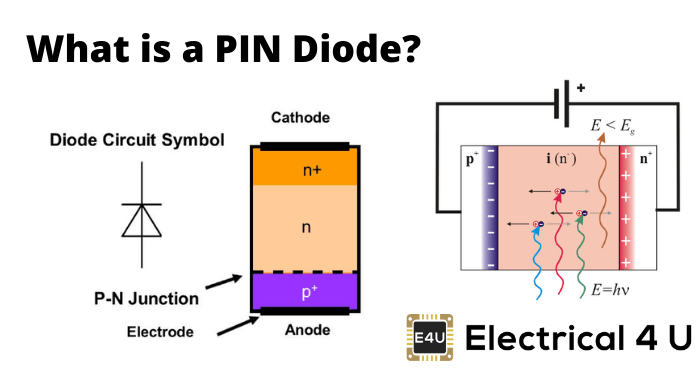 Definition of a PIN Diode

A Pin diode is a special type of diode that contains an undoped intrinsic semiconductor between the p-type semiconductor and n-type semiconductor regions. It differs from a normal diode in the sense that it has an extra layer in between the p and the n junctions. By an intrinsic layer, we mean a pure crystal of silicon or germanium without any doping in it. This layer does not conduct electric current well. The p-type and n-type layer is heavily doped as they are used for ohmic contacts.

It’s like having a p region, followed by an intrinsic region and then an N region, thus making it a PIN diode and hence derived the name from the same.

The symbol of pin diode is as follows:

Construction of a PIN Diode

As already explained, a pin diode has an intrinsic undopedlayer (having high resistivity) sandwiched between a PN junction, we will now look at the construction of the diode in detail.
Pin diode can be constructed in two different structures: Mesa structure and Planar structure. In mesa structure, layers which are already doped are grown onto the substrate (intrinsic layer). The amount of doping and thickness of the layer can be controlled as per the requirement. In a planar structure, an epitaxial layer is grown onto the substrate material and the p+ region is created either by ion implantation or diffusion.

Working of the PIN Diode

Although the working of a pin diode is similar to a regular diode, there are some differences due to the additional intrinsic layer. Pin diode is an inferior rectifier but is widely suitable for switches, attenuators etc.

When the PIN diode is subjected to forward bias, the depletion region at the p-n junction reduces. With the reduction of the depletion region, current starts flowing through the diode. The PIN diode acts as a variable resistance when operated in forward bias. A high electric field is developed across the junction and this speeds up the transport of charge carriers from the P region to the N region. This helps in faster operation and therefore pin diode is used for high-frequency applications.

When the pin diode is in reverse biased condition, the width of the depletion region increases. At a certain reverse bias voltage, the entire intrinsic layer will be swept out of charge carriers. This voltage is called the swept in voltage. The value is -2v. It is used for switching purposes while in reverse bias.

At a lower level of reverse bias, the depletion layer becomes fully depleted. The capacitance of the pin diode becomes independent of the level of bias once the depletion layer is fully depleted. This is because there is very little net charge in the intrinsic layer. The leakage of RF signal is lower than other diodes because the level of capacitance is typically lower.
In forward bias, the diode behaves as a resistor than a non-linear device and produces no rectification or distortion. The value of the resistance depends on the bias voltage. Pin diode is used as RF switch or variable resistor as they produce fewer distortions than a normal diode.

Pin diodes are used for a number of applications. Some of the important usages of these types of diodes are: