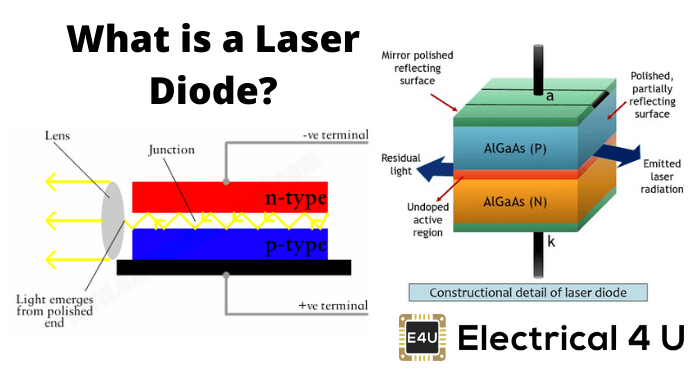 What is a Laser Diode?

Laser diodes are the semiconductor lasers which generate highly intense coherent beam of light. These were developed by Robert N. Hall in early 1960s and are also referred to as injection lasers. It is well known that an incident photon can interact with the atom to release a photon which will be identical to the impinging photon in all respects viz., phase, frequency, polarization and direction of travel.

This phenomenon is referred to as stimulated emission and forms the basis of working for Lasers (Light Amplification by Stimulated Emission of Radiations). Further, if this event occurs in case of a p-n junction, then the diode is referred to as laser diode. Laser Diodes are usually made of three layers (sometimes even two) where Gallium Arsenide (GaAs) like materials are doped with aluminium or silicon or selenium to produce p and n layers while the central, undoped, active layer is intrinsic in nature (Figure 1).

When a large forward bias is applied for such an arrangement, heavy current flows through the junction due to which electrons will gain more energy when compared to holes. This extra energy is released in the form of photons when electrons combine with the holes (during recombination process).

All these photons oscillate with a particular frequency and bounce back and forth between the reflective walls of the active layer. During this process, a few of them collide with the other atoms to produce more number of photons. This process continues and thus there will be an increase in the number of excited electrons when compared with those in the non-excited state.

This phenomenon is termed as population inversion and at this instant a constant highly coherent beam of light will be emitted from the central layer, in the direction parallel to it, through the partially reflecting surface as shown in Figure 1. 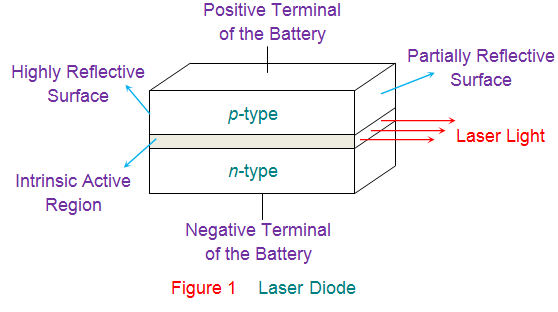 Further it is to be noted that inorder to obtain laser light, the end surfaces of the semiconductor material should be parallel to each other, and are to be cut and polished carefully.

Among these, one is to be made fully-reflective in nature while the other should be partially-reflective. Also, the wavelength of the light emitted by the laser diode depends on the distance between these two reflecting surfaces and will usually lie in either visible or IR spectrum. This wavelength decides the size of the spot the laser light can be confined to i.e. shorter the wavelength smaller will be spot size.

Laser diodes are compact in size and use little power and are thus preferred over lasers when the question will be of space and power consumption. Moreover laser diodes can be characterized in terms of their threshold current, Ith which indicates the value of current at which stimulated emission overcomes the spontaneous emission as shown by the L-I curve in Figure 2. 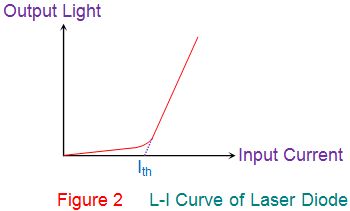 Laser diodes are available in wide variety of forms. If the active layer is narrow and if it can support only single optical mode of operation, resulting in a highly-focused beam, then such laser diodes are referred to as Single Mode Laser Diodes. On the other hand, Multi Mode Laser Diodes have broader active region which supports multiple lateral optical modes and thus have high output power.

However it is possible to obtain the output power greater than that of a single-mode laser diode without compromising on its confinement to narrow spectral range by using Master Oscillator Power Amplifier (MOPA) Laser Diodes, as they use an integrated power amplifier to increase the output power without affecting the narrow spectral output produced by the oscillator section. Further the laser diodes can either be Edge-emitting/Surface emitting depending on whether the laser light is emitted in the direction parallel or perpendicular to the material.

The applications of laser diodes include: