This indicates that both Si and Ge have four electrons each in their outer-most i.e. valence shell (indicated by red colour). These electrons are called valence electrons and are responsible for the conduction-properties of the semiconductors. 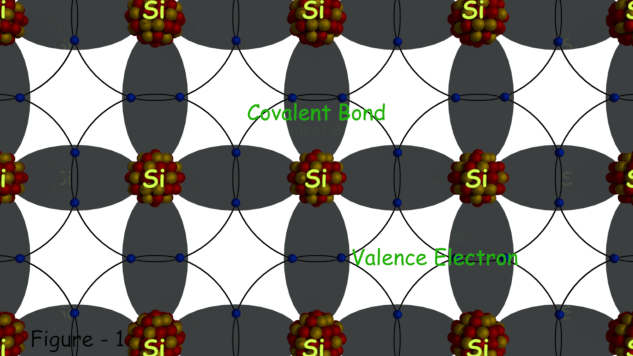 However, at room temperature, the thermal energy may cause a few of the covalent bonds to break, thus generating the free electrons as shown in Figure 3a. The electrons thus generated get excited and move into the conduction band from the valence band, overcoming the energy barrier (Figure 2b). During this process, each electron leaves behind a hole in the valence band. The electrons and holes created in this way are called intrinsic charge carriers and are responsible for the conductive properties exhibited by the intrinsic semiconductor material.

On applying an electric field to such an intrinsic semiconductor, the electron-hole pairs can be made to drift under its influence. In this case, the electrons move in the direction opposite to that of the applied field while the holes move in the direction of the electric field as shown in Figure 3b. This means that the direction along which the electrons and the holes move are mutually opposite. This is because, as an electron of a particular atom moves towards say, left, by leaving a hole in its place, the electron from the neighboring atom occupies its place by recombining with that hole. However while doing so, it would have left one more hole in its place. This can be viewed as the movement of the holes (towards right side in this case) in the semiconductor material. These two movements, although opposite in direction, result in the total flow of current through the semiconductor. 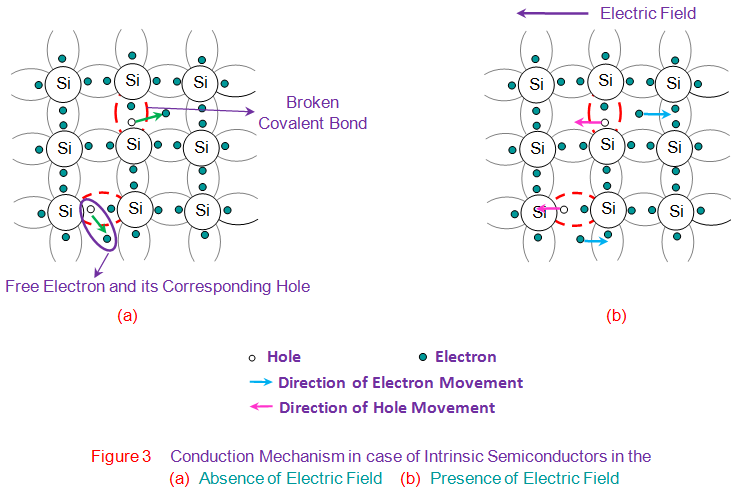 Mathematically the charge carrier densities in intrinsic semiconductors are given by