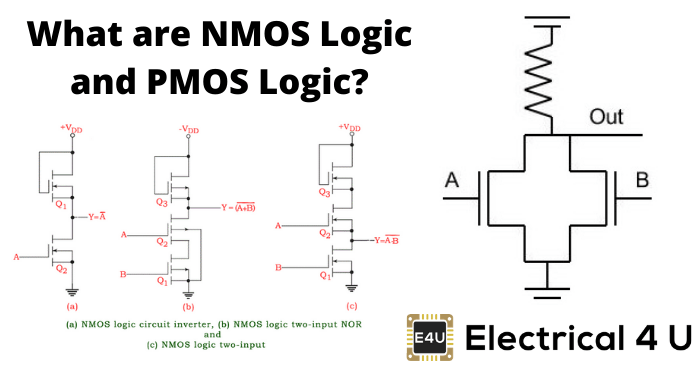 The TTL, the CMOS and the ECL logic families are not suitable for implementing digital ICs that have a large-scale integration (LSI) level of inner circuit complexity and above. The competitors for LSI-class digital ICs are the PMOS, the NMOS and the integrated injection logic (I2L). The first two are briefly discussed in this section.

The PMOS logic family uses P-channel MOSFETS. Figure (a) shows an inverter circuit using PMOS logic (not to be confused with a power inverter). MOSFET Q1 acts as an active load for the MOSFET switch Q2. For the circuit shown,

GND and −VDD respectively represent a logic ‘1’ and a logic ‘0’ for a positive logic system. When the input is grounded (i.e. logic ‘1’), Q2 remains in cut-off and −VDD appears at the output through the conducting Q1. When the input is at −VDD or near −VDD, Q2 conducts and the output goes to near-zero potential (i.e. logic ‘1’). Figure (b) shows a PMOS logic based two-input NOR gate. In the logic arrangement of Fig.(b), the output goes to logic ‘1’ state (i.e. ground potential) only when both Q1 and Q2 are conducting.

It is for this reason that most of the MOS memory devices and microprocessors employ NMOS logic or some variation of it such as VMOS, DMOS and HMOS. VMOS, DMOS and HMOS are only structural variations of NMOS, aimed at further reducing the propagation delay. Figures (a), (b) and (c) respectively show an inverter, a two-input NOR and a two-input NAND using NMOS logic. The logic circuits are self-explanatory.