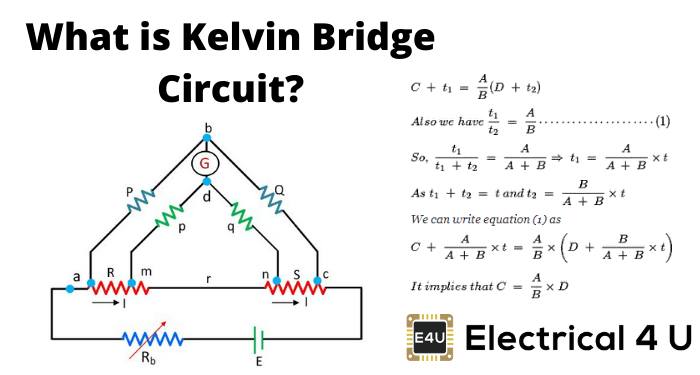 Before we introduce Kelvin Bridge, it is very essential to know what is the need of this bridge, though we have Wheatstone bridge which is capable of measuring electrical resistance accurately (usually an accuracy of around 0.1%).

To understand the need of Kelvin bridge we must first recognize 3 important ways to categorize electrical resistance:

So, we have to use our brain to judge what device must be used to measure a particular value of electrical resistance. However there are other kind of methods also like ammeter-voltmeter method, substitution method etc but they give large error as compared to bridge method and are avoided in most of the industries.

One of the major drawbacks of the Wheatstone bridge is that although it can measure the resistance from few ohm to several mega ohm – it gives significant errors when measuring low resistances.

So, we need some modification in Wheatstone bridge itself, and the modified bridge so obtained is Kelvin bridge, which is not only suitable for measuring low value of resistance but has wide range of applications in the industrial world.

Let us discuss few terms that will be very helpful to us in studying the Kelvin Bridge.

Bridge :
Bridge’s usually consists of four arms, balance detector and source. They work on the concept of null point technique. They are very useful in practical applications because there is no need of making the meter precise linear with an accurate scale. There is no requirement of measuring the voltage and current, the only need is to check the presence or absence of current or voltage. However the main concern is that during the null point meter must be able to pick up fairly small current. A bridge can be defined as the voltage dividers in parallel and the difference between the two dividers is our output. It is highly useful in measuring components like electrical resistance, capacitance, inductor and other circuit parameters. Accuracy of any bridge is directly related to bridge components.

Null point:
It can be defined as the point at which the null measurement occurs when the reading of ammeter or voltmeter is zero.

As we have discussed that Kelvin Bridge is a modified Wheatstone bridge and provides high accuracy especially in the measurement of low resistance. Now the question that must be arise in our mind that where do we need the modification. The answer to this question is very simple – it is the portion of leads and contacts where we must do modification because of these there is an increment in net resistance.

Let us consider the modified Wheatstone bridge or Kelvin bridge circuit given below:

Then also the presence of t1 causes no error, we can write,

Thus we can conclude that there is no effect of t (i.e. the resistance of leads). Practically it is impossible to have such situation however the above simple modification suggests that the galvanometer can be connected between these points j and k so as to obtain the null point.

Why it is called double bridge? It is because it incorporates the second set of ratio arms as shown below:

Again we reach the same result – t has no effect. However equation (2) is useful as it gives error when: