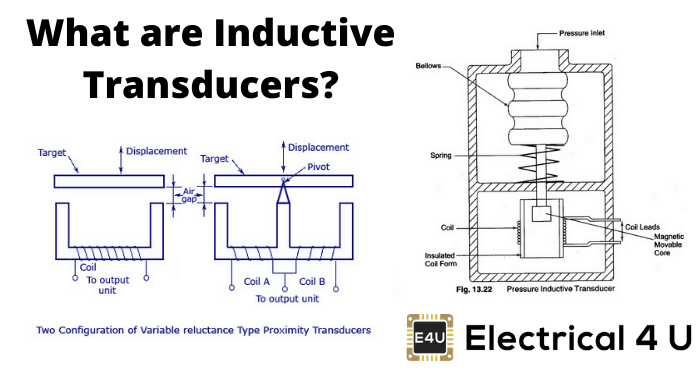 Now first our motive is to find how the inductive transducers can be made to work. This can be done by changing the flux with the help of measured and this changing flux obviously changes the inductance and this inductance change can be calibrated in terms of measured. Hence inductive transducers use one of the following principles for its working.

Let’s discuss each principle one by one.

Change of Self Inductance of Inductive Transducer

Where,
N = number of turns.
R = reluctance of the magnetic circuit.

Also we know that reluctance R is given by

Where, μ = effective permeability of the medium in and around the coil.

Where,
G = A/l and called the geometric form factor.
A = area of cross-section of the coil.
l = length of the coil.

So, we can vary self inductance by

For the sake of understanding we can say that if the displacement is to be measured by the inductive transducers, it should change any of the above parameter for causing in the change in self inductance.

Mutual inductance between these two coils is given by

We know that when a conducting plate is placed near a coil carrying alternating current, a circulating current is induced in the plate called “EDDY CURRENT”. This principle is used in such type of inductive transducers. Actually what happens? When a coil is placed near to coil carrying alternating current, a circulating current is induced in it which in turn produces its own flux which try to reduce the flux of the coil carrying the current and hence inductance of the coil changes. Nearer the plate is to the coil, higher will be eddy current and higher is the reduction in inductance and vice versa. Thus inductance of coil varied with the variation of distance between coil and plate. Thus the movement of the plate can be calibrated in terms of inductance change to measure the quantity like displacement.