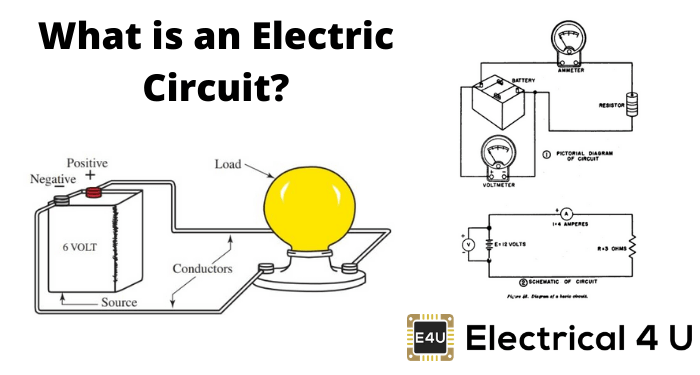 What is an Electrical Circuit?

An electrical circuit (also known as an electrical network or electric circuit) is an interconnection of various active and passive components in a prescribed manner to form a closed path. Electric current must be able to flow from the source through some conductive medium and then back to the other terminal of the source.

The main parts of an ideal electric circuit are:

In this figure shows a simple electric circuit containing

Due to this, a current I, flows in the circuit and a potential drop of V volts appears across resistor.

The basic properties of electric circuits include:

The main types of electric circuits are:

If due to disconnection of any part of an electric circuit if there is no flow of current through the circuit, is said to be an open circuited.

If there is no discontinuity in the circuit and current can flow from one part to another part of the circuit, the circuit is said to be closed circuit.

Electric circuits can be further categorized according to their structural features into either:

When all elements of a circuit are connected one after another in tail to head fashion and due to which there will be only one path of flowing current then the circuit is called series circuit.

The circuit elements then are said to be series-connected. In the series electrical circuit, the same current flows through all elements connected in the series.

If components are connected in such a way that the voltage drop across each component is same then it is known as parallel circuit.

An example of a parallel circuit is the wiring system of a house. If one of the electric lamp burns out, current can still flow through the rest of the lights and appliances.

In a parallel circuit the voltage is the same for all elements.

When the resistors are connected in parallel:

When the inductors are connected in parallel:

When the capacitors are connected in parallel:

Most of the practical circuits are series-parallel circuits. A very common example is the connection of conductors in the rotor of the DC motor.