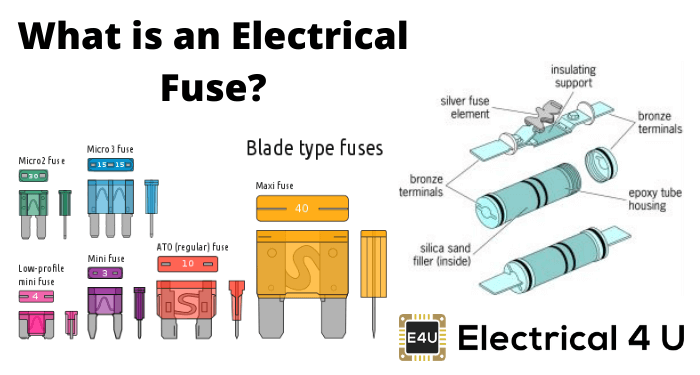 This high current may have a very high thermal effect which will cause permanent damage to the valuable pieces of equipment connected to the electrical network. So this high fault current should be interrupted as fast as possible. This is what an electrical fuse does.

A fuse is a part of the circuit which consists of a conductor which melts easily and breaks the connection when the current exceeds the predetermined value. An electrical fuse is the weakest part of an electrical circuit that breaks when more than predetermined current flows through it.

The current carrying capacity of a fuse wire depends upon a number of factors like, what material used for it, what are the dimension of it, i.e., diameter and length, size, and shape of terminals used to connect it, and the surrounding.

Fuse law determines the current carrying capacity of a fuse wire. We can establish the law in the following way.

Where, ρ is the resistivity, l is the length and a is the cross-sectional area of fuse wire.

Where, d is the diameter of fuse wire.

This is known as fuse law 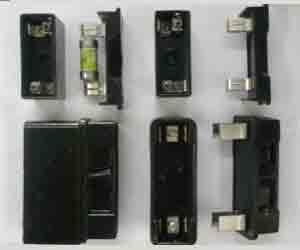 In cartridge fuse the fuse wire is enclosed in a transparent glass tube or bulb, the whole unit is sealed off. In case the fuse blows, it is to be replaced by a new one as the cartridge fuse can not be rewired due to its sealing.

For the small value of current interruption lead-tin, alloy fuse wire has been used in past. The most preferred lead-tin alloy for fuse wire containing 37% lead and 63% tin. This alloy fuse wire is also known as Eutectic Alloy Fuse Wire. This type of alloy has some specific characteristics due to which this is preferred as fuse wire.

HRC fuse or high rupturing capacity fuse– In that type of fuse, the fuse wire or element can carry short circuit heavy current for a known time period. During this time if the fault gets removed, then it does not blow off. Otherwise, it blows off or melts. The enclosure of HRC fuse is either of glass or some other chemical compound.

This enclosure is sufficiently airtight to avoid the effect of the atmosphere on the fuse materials. The ceramic enclosure having a metal end cap at both heads, to which fusible silver wire gets welded. There is a space within the enclosure, surrounding the fuse wire or fuse element, completely packed with a filling powder.

When the overrated current flows through the fuse element of the high rupturing capacity fuse the element is melted and vaporized.

The filling powder is of such a quantity that the chemical reaction between the silver vapor and the filling powder forms a high electrical resistance substance which very much helps in quenching the arc.