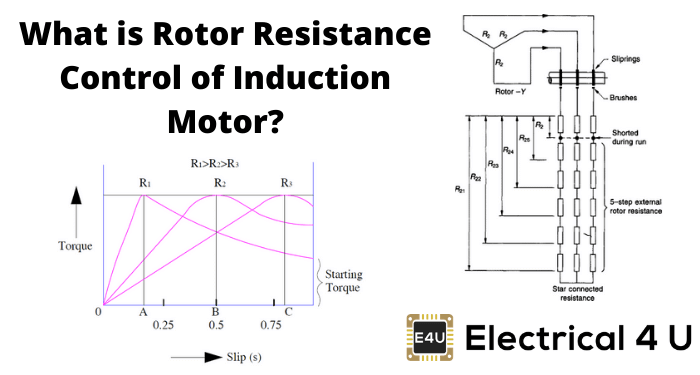 From the figure 1 it is clear how does the speed vary with the change of rotor resistance.
At the normal operating condition the slip increases with increasing torque hence they are obeying a linear characteristics. For a fixed load curve, the speed is downward from n1 to n4. From this figure we can also obtain the maximum torque at the starting of the resistance r2”. So, this method has an advantage of achieving maximum torque at the starting period.

Characteristics
But the maximum torque is independent of the rotor resistance as per the equation,

The above mentioned problems can easily be eliminated by using Pulse Width Modulation (PWM), or Pulse Duration Modulation (PDM) with the bridge rectifier and a switching transistor.

Rotor resistance can also be varied steplessly using the circuit shown in figure (a). The AC output voltage of the rotor is rectified by diode bridge rectifier and fed to parallel combination of fixed resistor R and a semiconductor switching transistor Tr. Effective value of resistance across terminal A and B i.e., RAB is varied by varying duty cycle of the transistor Tr, which in turn varies the resistance of the rotor circuit. Inductance is added to the circuit to reduces the ripple and discontinuity in the dc link current Id. Rotor current waveform is shown in the fig.(b) when the ripple is neglected. Thus the rms value of the current will be

Where, δ is the duty ratio of the transistor.
Electrical power consumed by the RAB resistor per phase is

Conclusion
Although the method of speed controlling of induction motor using this technology is efficient, but as we are using resistance to control the speed of the motor here also resistive losses occurs, which causes unnecessary heating effect on the motor and also reduces the efficiency in some extent. That is why it cannot be operated for continuous operation, it is used in the intermittent application such as overhead cranes, load fluctuations etc.