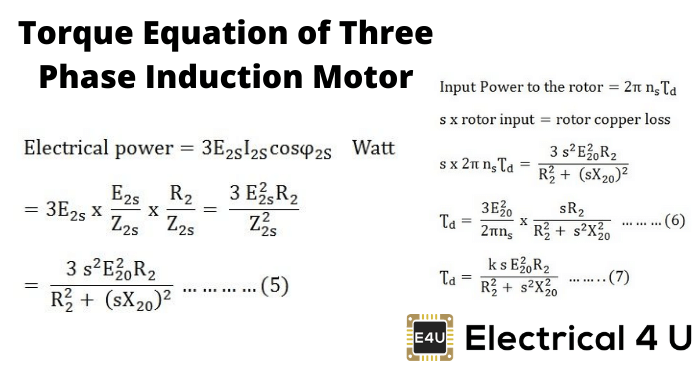 Where, T is the torque produced by the induction motor,
φ is flux responsible for producing induced emf,
I2 is rotor current,
cosθ2 is the power factor of rotor circuit.

The flux φ produced by the stator is proportional to stator emf E1.
i.e φ ∝ E1
We know that transformation ratio K is defined as the ratio of secondary voltage (rotor voltage) to that of primary voltage (stator voltage).

Rotor current I2 is defined as the ratio of rotor induced emf under running condition , sE2 to total impedance, Z2 of rotor side,

and total impedance Z2 on rotor side is given by ,

Putting this value in above equation we get,

We know that power factor is defined as ratio of resistance to that of impedance. The power factor of the rotor circuit is

Putting the value of flux φ, rotor current I2, power factor cosθ2 in the equation of torque we get,

Combining similar term we get,

Removing proportionality constant we get,

Derivation of K in torque equation.
In case of three phase induction motor, there occur copper losses in rotor. These rotor copper losses are expressed as
Pc = 3I22R2
We know that rotor current,

Substitute this value of I2 in the equation of rotor copper losses, Pc. So, we get

Substitute the value of Pc in above equation we get,

On simplifying we get,

Substituting the value of Pm

We know that the rotor speed N = Ns(1 – s)
Substituting this value of rotor speed in above equation we get,

Starting torque is the torque produced by induction motor when it starts. We know that at the start the rotor speed, N is zero.

The starting torque is also known as standstill torque.

In the equation of torque,

The rotor resistance, rotor inductive reactance and synchronous speed of induction motor remain constant. The supply voltage to the three phase induction motor is usually rated and remains constant, so the stator emf also remains the constant. We define the transformation ratio as the ratio of rotor emf to that of stator emf. So if stator emf remains constant, then rotor emf also remains constant.
If we want to find the maximum value of some quantity, then we have to differentiate that quantity concerning some variable parameter and then put it equal to zero. In this case, we have to find the condition for maximum torque, so we have to differentiate torque concerning some variable quantity which is the slip, s in this case as all other parameters in the equation of torque remains constant.
So, for torque to be maximum

Neglecting the negative value of slip we get

The equation of torque is

The torque will be maximum when slip s = R2 / X2
Substituting the value of this slip in above equation we get the maximum value of torque as,

In order to increase the starting torque, extra resistance should be added to the rotor circuit at start and cut out gradually as motor speeds up.
Conclusion
From the above equation it is concluded that