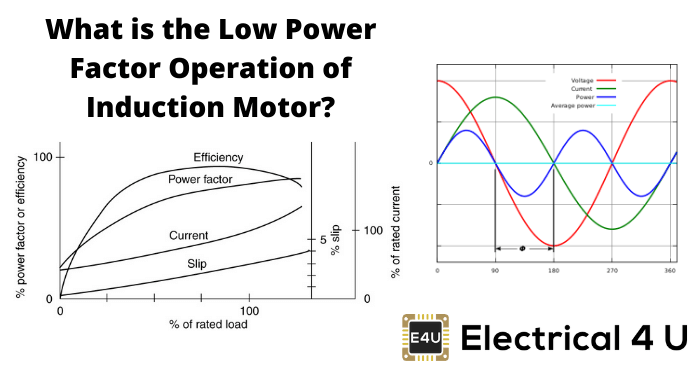 Induction Motors finds various applications in industries and household equipments. Such machine requires magnetic fields for its functioning hence, it draws magnetizing current from the source. The magnetizing current is the current that establishes the flux in the air gap of an Induction motor and this is independent of the load on the motor. It is typically around 20% to 60% of the full load current of the motor. Magnetizing current does not contribute to the work output of motor, as its role is to provide a medium (magnetic field) required in power exchange between stator and rotor through induction principle. Generally an Induction motors operates at low power factor (approx pf 0.2 to 0.4) during light load or no load condition and at full load (approx pf 0.8 to 0.9). At low load or no load condition because of presence of only magnetizing current in the stator windings, causes low power factor operation of the power system, since magnetizing current is highly inductive in nature.

A low power factor operation results in excess burden on generators (increase KVA demand) and for the same power output at constant voltage value of current increases which leads to increase in conductor size hence increases the cost of transmission lines further due to excessive high current in transmission conductors, increases copper losses which results in poor transmission efficiency and a poor voltage regulation due to large voltage drop hence it is advisable to operate induction motors at full load.
In order to reduce the losses due to low power factor operation of induction motors especially in transformers and distribution equipments, power factor corrections are required like capacitor bank, synchronous phase modifiers etc,their role is to compensate for the reactive power demand of the induction motors and to restore the power factor as close to unity, as it is economically viable.

Power factor correction is achieved by connecting a capacitor (say) either in parallel with the motor, or it can be applied at the equipment distribution board or at the source end. Typically, the corrections are placed on either the Mains or Delta contactor circuits. Care must be taken in connecting a static compensator (say capacitor) since the Reactive Var demanded by the motor varies continuously due to variation in load demand, there is a possibility of over or under compensation provided by the compensators as it is a source of constant reactive power and it may result in fatal operation of motors. To safeguard motors from such operations micro controllers are equipped with it which continuously monitor the reactive power requirement of motors and thus regulate the compensations provided by compensators. Thus with efficient controllers and compensators low power factor operation of induction motor during light load or during no load opearation can be efficiently handled and thus with improve pf, transmission efficiency and effectiveness can be enhanced.