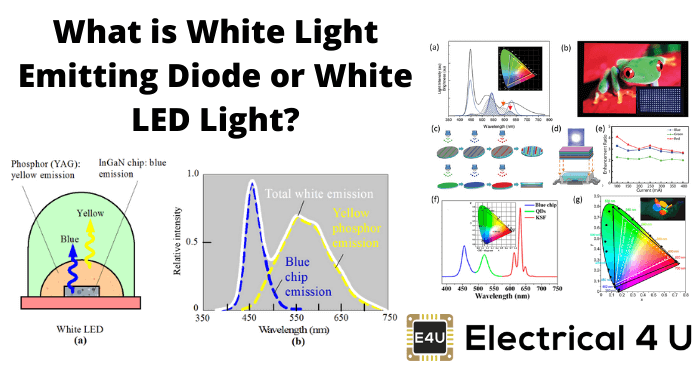 White Light Emitting Diodes or White LEDs are the next big thing in lighting. Earlier LEDs were restricted to applications like indicators, displays or emergency lighting. But with the advent of white light emitting LEDs, they are now used in almost all lighting applications ranging including indoor lighting, street lighting to flood lighting. In other words, white LEDs have become omnipresent. 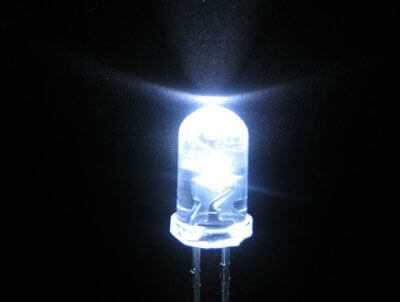 Wavelength conversion is a process which involves converting completely or partly an LED’s radiation to white light. There are various available methods to produce white light from LEDs through the process of wavelength conversion. Some of these methods include the use of blue LED and yellow phosphor; blue LED and several phosphors; ultraviolet LED and blue, green, and red phosphors; and an LED with quantum dots.

In this method of wavelength conversion, an LED which emits blue colour radiation is used to excite a yellow colour phosphor (Yttrium Aluminum Garnet). This results in the emission of yellow and blue light and this resulting mixture of blue and yellow light gives the appearance of white light. This method is the least expensive method for producing white light.

This method of wavelength conversion involves the use of multiple phosphors with a blue LED. Each of the phosphor used emits a different colour of light when radiation emitted by blue LED falls on them. These different colours of light combine with the original blue light to produce white light. Using multiple phosphors instead of yellow phosphor produces white light which has a broader wavelength spectrum and a better colour quality in terms of CRI and CCT. However, this process is more expensive compared to the process involving only yellow (YAG) phosphor.

A third wavelength conversion method deals with the use of an ultraviolet radiation emitting LED in conjunction with red, green, and blue (RGB) phosphors. The LED emits ultraviolet radiation, not visible to human eye, which falls on the red, green, and blue phosphors and excites them. When these RGB phosphors gets excited, they emit radiations which are mixed together to provide a white light. This white light has a still broader wavelength spectrum than earlier discussed technologies. 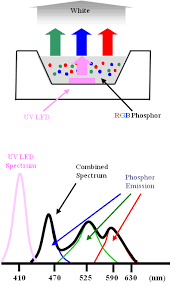 In this method a blue LED is used to activate quantum dots. Quantum dots are extremely small semiconductor crystals between 2 and 10 nm. They correspond to 10–50 atoms in diameter. When quantum dots are used with a blue LED, they form a thin layer of nano-crystal particles that contains 33 or 34 pairs of cadmium or selenium that are coated on top of the LED. The blue light emitted by the LED excites the quantum dots. This excitation results in the generation of a white light that has a wavelength spectrum almost similar to the white light produced by ultraviolet LED along with RGB phosphors. 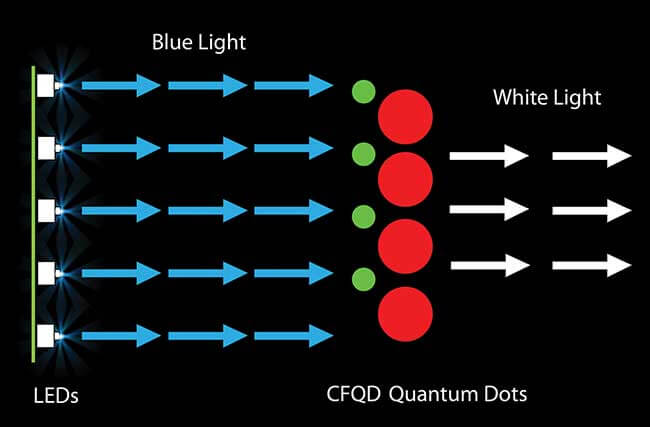 Multiple LEDs (generally emitting the primary colors red, blue and green) are fitted inside a lamp and the intensity of each LED is tuned proportionately to obtain white light. This is the basic idea of colour mixing technique. Colour mixing technique requires minimum two LEDs in conjunction, emitting blue and yellow light, whose intensities are to be varied in order to generate white light. Color mixing is also done using four LEDs where RED, BLUE, GREEN, and YELLOW are used side by side. As phosphors are not used in color mixing, there is no loss of energy during the conversion process and therefore, color mixing technique is more efficient than wavelength conversion techniques. 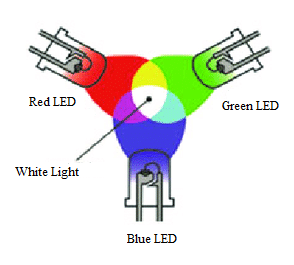 In this technology, white light is generated by growing an epitaxial blue LED layer on a zinc selenide (ZnSe) substrate. This results in the simultaneous emission of blue light from the active region and yellow light from the substrate. The epitaxial layer of the LED emitted a greenish blue light at 483 nm, whereas the ZnSe substrate simultaneously emitted an orange light at 595 nm. The combination of this greenish blue light of wavelength 483 nm and orange colour light of wavelength 595 nm produces a white light and we get a white LED whose correlated colour temperature (CCT) is in the range of 3000 K and above. The average life of this white LED is around 8000 hours.

Presently, this LED is used in applications such as lighting, indicators, and back-lights for liquid crystal displays. However, with the increase in its average life, this white LED will become suitable for additional lighting applications. 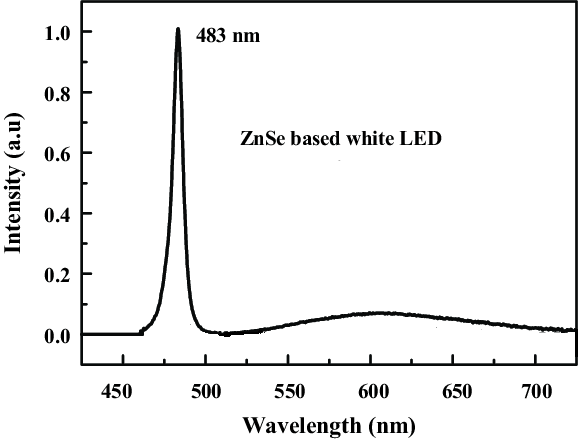