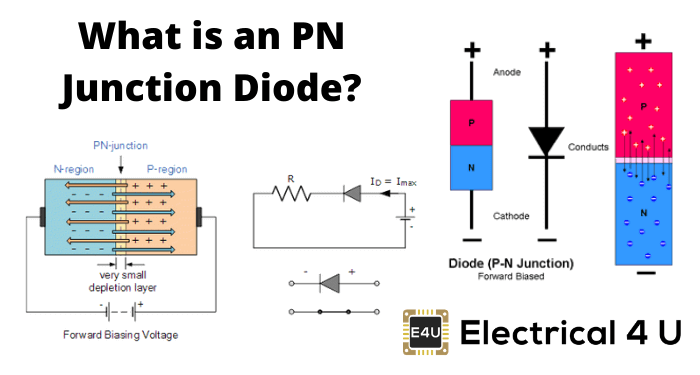 If, we apply forward bias voltage to the p-n junction diode. That means if the positive side of the battery is connected to the p-side, then the depletion regions width decreases and carriers (holes and free electrons) flow across the junction. If we apply a reverse bias voltage to the diode, the depletion width increases and no charge can flow across the junction.

The diffusion potential creates a potential barrier for further migration of free electrons from n-type side to p-type side and holes from p-type side to n-type side. That means diffusion potential prevents charge carriers to cross the junction. This region is highly resistive because of depletion of free charge carriers in this region. The width of the depletion region depends on the applied bias voltage. The relation between the width of the depletion region and bias voltage can be represented by an equation called Poisson Equation.

Here, ε is the permittivity of the semiconductor and V is the biasing voltage. So, on an application of a forward bias voltage the width of the depletion region i.e. pn junction barrier decreases and ultimately disappears. Hence, in absence of potential barrier across the junction in the forward bias condition free electrons enter into the p-type region and holes enter into the n-type region, where they recombine and release a photon at each recombination. As a result, there will be a forward current flowing through the diode. The current through the PN junction is expressed as

Here, voltage V is applied across the pn junction and total current I, flows through the pn junction. Is is reverse saturation current, e = charge of electron, k is Boltzmann constant and T is temperature in Kelvin scale.

The graph below shows the current-voltage characteristic of a PN junction diode.

When, V is positive the junction is forward biased, and when V is negative, the junction is reverse biased. When V is negative and less than VTH, the current is minimal. But when V exceeds VTH, the current suddenly becomes very high. The voltage VTH is known as the threshold or cut in voltage. For Silicon diode VTH = 0.6 V. At a reverse voltage corresponding to the point P, there is abrupt increment in reverse current. This portion of the characteristics is known as breakdown region.