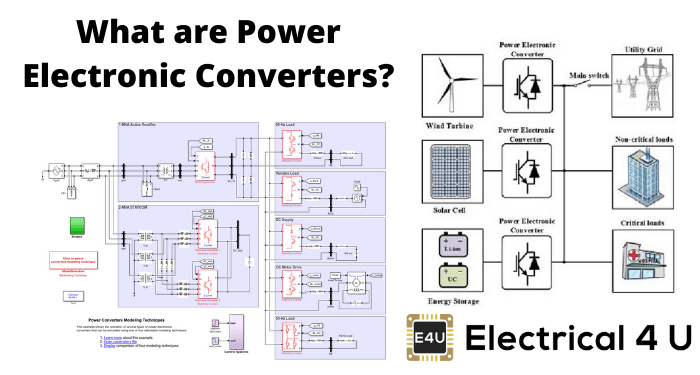 The conditioning of signals helps us to ensure clean and pure, i.e. free from harmonics, input and output signals. It is not possible to obtain absolutely clean signals, but there are ways and means to reduce the harmonic content, the simplest of which is the use of a simple low-pass LC filter.

Resistances lead to a loss of power, and thus a loss in efficiency and power converters are required to be highly efficient as power loss during conversion leads to lowering of the efficiency of the whole system. If you’re looking to study some technical questions on power electronics, check out our basic electronics questions.

However, switching losses are small compared to conduction losses. Higher switching losses will lead to higher temperatures across the junctions, and a temperature difference of more than a 100oC between the body and junction can lead to damage to the solid-state device. We can take care of this with a suitably sized heat sink.

The main types of conversion are DC to DC, AC to DC, DC to AC and AC to AC. The use of DC to DC converters to step-up or step-down a DC voltage is a great boon because AC voltages can be stepped up or stepped down easily using a transformer but using a transformer with DC leads to saturation of the core and will ultimately damage the transformer. The conversion of AC to DC is known as rectification which is used to supply DC loads, such as DC motors, using AC power supply.

DC to AC conversion is known as inversion and is a very useful important part of our daily lives nowadays where we are trying to remove our dependency on fossil fuels. Inverters can take power from DC sources, such as batteries, and convert them to AC power for use in AC motors as can be seen in Totos, etc. AC to AC conversion is done using either Cycloconverters or Matrix Cycloconverters. These converters are very powerful in a sense they can be used for a wide range of industrial uses, such as cement and ball mill drives, Rolling mill drives etc. Cycloconverters can even convert a single-phase AC supply to a three-phase supply and vice-versa.

Control of converters deals with the logic implemented, either with analog electronics or digital based microcontrollers, DSP processors or FPGA’s, to switch on and off the solid-state devices. The simplest is the Pulse Width Modulation (PWM) scheme. Control of the converters becomes complicated when the converters use feedback loops.