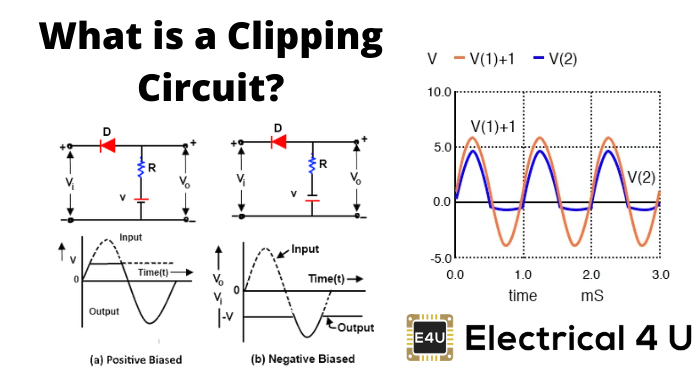 It is in fact a wave shaping circuit, which can control the shape of the output waveform by eliminating or clipping a part of applied wave. This is done without distorting the other (remaining) part of waveform.
The clipping circuit does not have energy storage elements (capacitors) but it includes both linear (Resistors) and nonlinear elements (transistors or junction diodes). This circuit is normally used for the selection in the transmission purpose. In transmission, a portion of a signal wave form occupied below or above a particular reference voltage level is selected. Other than the name – Clipping circuits; Slicers, Clippers, Limiters or Amplitude selectors are also often used.

At least two components – an ideal diode and resistor are employed for the formation of these clippers. In some cases; for fixing the clipping level, a DC battery is also used (Figure 1). When the circuit is forward biased, the ideal diode used operates as a closed switch. When the circuit is reversed biased, the ideal diode used operates as an open switch. Here; by altering the voltage of the battery and by exchanging the position of the various elements, the input waveform can be clipped.

In positive shunt clipper, when the input is negative, the whole input voltage appears across the resistor RL or diode (if R<<rL). When R<<rL, this circuit will operates as voltage divider and its output voltage is

The clippers discussed above are considered as the circuits with ideal diode. But if the barrier potential (V0) is considered (Si = 0.7 V and Ge = 0.3 V), the output voltage of positive and negative clippers are shown below. 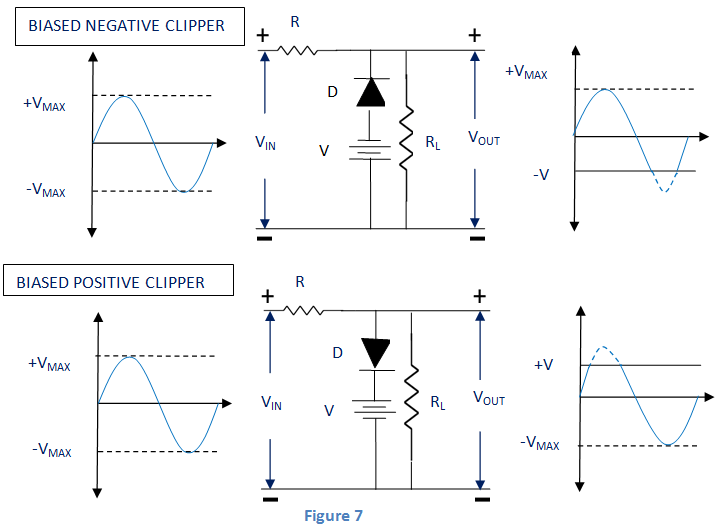 For removing a portion of both positive and negative half cycle of input signal, we use this combination clipper (figure below).

Zener Diode as a Peak Clipper

Zener diodes can be employed for removing (clipping off) the portion of input waveform in the wave shaping circuit (see figure below).