However, Hay’s bridge and Maxwell bridge are suitable for measuring accurately high and medium quality factors respectively. So, there is need of bridge which can measure low-quality factor and this bridge is modified Maxwell’s bridge and known as Anderson’s bridge.

It is well known for its accuracy of measuring inductors from a few micro Henry to several Henry. The unknown value of the self inductor is measured by the method of comparison of the known value of electrical resistance and capacitance. Let us consider the actual circuit diagram of Anderson’s bridge (see figure given below). 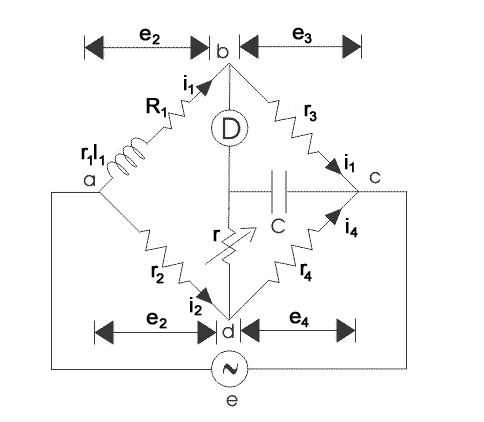 In this circuit, the unknown inductor is connected between the point a and b with electrical resistance r1 (which is pure resistive).

The arms bc, cd and da consist of resistances r3, r4 and r2 respectively which are purely resistive. A standard capacitor is connected in series with variable electrical resistance r and this combination is connected in parallel with cd.

A supply is connected between b and e.
Now let us derive the expression for l1 and r1:

At the balance point, we have the following relations that hold good and they are:

Now equating voltages drops we get,

Putting the value of ic in the above equations, we get

The above equation (7) obtained is more complex than we have obtained in the Maxwell bridge. On observing the above equations we can easily say that to obtain convergence of balance more easily, one should make alternate adjustments of r1 and r in Anderson’s bridge.

Now let us look at how we can obtain the value of unknown inductors experimentally. At first set the signal generator frequency at audible range. Now adjust r1 and r such that the phones give a minimum sound.

Measure the values of r1 and r (obtained after these adjustments) with the help of a multimeter. Use the formula that we have derived above in order to find out the value of unknown inductance. The experiment can be repeated with the different values of the standard capacitor.

Here in the phasor diagram of Anderson’s bridge, we have taken i1 as the reference axis. Now ic is perpendicular to i1 as the capacitive load is connected at ec, i4 and i2 are lead by some angle as shown in the figure.

Similarly, e4 can be obtained by voltage drop i4.r4 which is making angle ‘B’ with the reference axis.

Considering above all the advantages and disadvantages, the Maxwell bridge is preferred over Anderson’s bridge whenever the use of a variable capacitor is permissible.