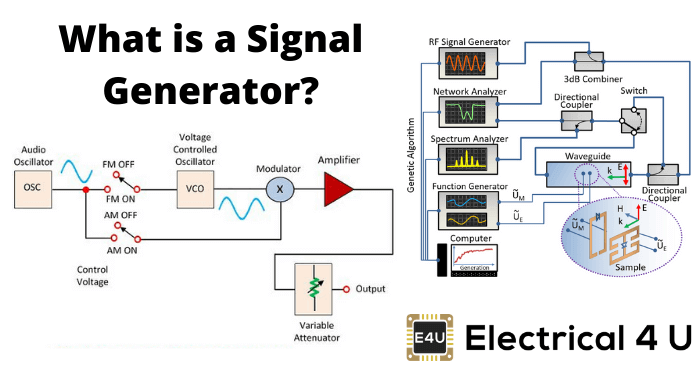 What is a Signal Generator?

A function generator contains an electronic device called electronic oscillator which generates simple repetitive wave forms such as sine waves, square waves, triangular wave forms, and sawtooth wave forms. In modern devices, these wave forms are created by digital signal processing technique followed by analogous signals of lower frequencies so they are often required.
A variety of function generators are black boxes with USB interfaces, used in instrumentation bus, and some are in the form of software. Their common uses are in the field of education, repairing electrical and electronic equipment and stimulus testing.

Arbitrary generators are a device that generates arbitrary streams of digital information. These waveforms do not have any fixed shape, and can be entered in a variety of waveforms. This is a generator with two independent output channels, which can stimulate two systems simultaneously. A common use of an arbitrary waveform generator is to stimulate a system with a complex waveform. It has a display screen that shows an exact picture of the arbitrary waveforms that helps in avoiding the chance of mistake while selecting waveform from memory. These types of generators have limited bandwidth and costlier than function generators. It is used in the semiconductor component, communication, and system tests.

It is based on sine wave oscillator with a sharp distinction in design of radio frequency and audio frequency signal generators. But now it is outdated and digital electronics are in use.

Logical signal generators produce logic pulses in the form of conventional voltage levels. These generators are often called digital pattern generators. Pulse generators are able to generate pulses with variable delays and some even offer variable rise and fall times. It is used for functional validation and testing.

Audio signal generators generate signals in the range of audible i.e. typically in the range of 20 Hz to 20 KHz. It is used in checking frequency response in an audio system and the distortion measurements. Even a very low distortion could be measured with a relatively simple circuit by an audio signal generator. They have very low levels of harmonic distortion. These generators have a wide variety of application in electronic laboratories. Those generators which use intricate methods to generate audio signals for music are termed as the synthesizer.

A video signal generator is a device which produces video waveforms. Along with that, some other signals are also used to stimulate faults. The important factor which effects video image on television is synchronization. That is why the output waveform of video generators normally contains synchronization signals, which includes vertical and horizontal sync. It has the variety of applications and digital formats.