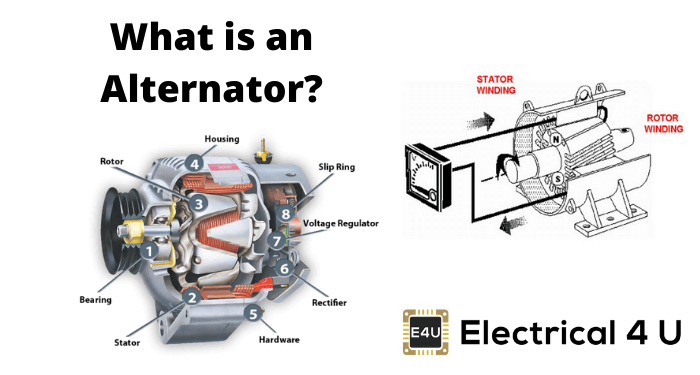 What is an Alternator?

An alternator is defined as a machine which converts mechanical energy to electrical energy in the form of alternating current (at a specific voltage and frequency). Alternators are also known as synchronous generators.

Where is an Alternator Used?

Alternators produce the power for the electrical systems of modern vehicles. Previously, DC generators or dynamos were used instead. But after the development of the alternator, they replaced DC dynamos since alternators are more robust and lightweight.

Since the electrical system of motor vehicles requires direct current and not alternating current, an alternator is used alongside a diode rectifier to convert the current from AC to DC.

Despite this need to convert the current from AC to DC, an alternator is still used as it lacks the complicated commutation present in a DC generator.

This particular type of generator used in the vehicle is known as an automotive alternator (learn how an alternator is constructed).

Another use of alternators is in diesel-electric locomotive. The engine of this locomotive is nothing but an alternator, driven by a diesel engine.

We also use this machine in marine similar to a diesel-electric locomotive. We specially design the synchronous generator used in marine and navy with appropriate adaptations to the salt-water environment.

The typical output level of a marine alternator is about 12 or 24 volt. In big marine sheep, more than one units are used to provide massive power.

In this marine system, the energy produced by the alternator is first rectified then used for charging the engine starter battery and auxiliary supply battery of the marine.

Alternators or synchronous generators can be classified in many ways depending upon their applications and designs.

The five different types of alternators include:

We can categorize these AC generators (alternators) in many ways, but the two main categories depending on their design are:

We use it as low and medium speed alternator. It has a large number of projecting poles having their cores bolted or dovetailed onto a heavy magnetic wheel of cast iron or steel of good magnetic quality.

Such generators get characterized by their large diameters and short axial lengths. These generators look like a big wheel. These are mainly used for low-speed turbine such as in hydel power plant.

We use it for a steam turbine-driven alternator. The rotor of this generator rotates at a very high speed. The rotor consists of a smooth solid forged steel cylinder having certain numbers of slots milled out at intervals along the outer periphery for accommodating field coils.

These rotors are designed mostly for 2 poles or 4 poles turbo generator running at 36000 rpm or 1800 rpm respectively.

History of the Alternator

Michael Faraday and Hippolyte Pixii gave the very first concept of an alternator. Michael Faraday designed a rotating rectangular turn of conductor inside a magnetic field to produce alternating current in the external static circuit.

After that in the year of 1886 J.E.H. Gordon, designed and produced first prototype of a useful model. After that, Lord Kelvin and Sebastian Ferranti designed a model of a 100 to 300 Hz synchronous generator.

Nikola Tesla in 1891, designed a commercially useful 15 kHz generator. After this year, polyphase alternators came into the picture which can deliver currents to multiple phases.

1 thought on “Alternator Synchronous Generator And The Types of Alternators”