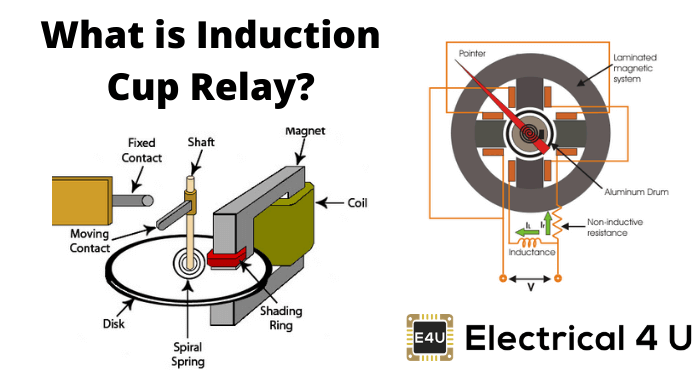 In four pole unit, shown in our example, the eddy current produced in the cup due to one pair of poles, directly appears under other pair of poles. This makes, torque per VA of this relay is about three times more than that of induction disc type relay with a C-shaped electromagnet. If magnetic saturation of the poles can be avoided by designing, the operating characteristics of the relay can be made linear and accurate for a wide range of operation.

As we said earlier, the working principle of induction cup relay, is same as the induction motor. A rotating magnetic field is produced by different pairs of field poles. In four poles design both pair of poles are supplied from same current transformer’s secondary, but phase difference between the currents of two pole pairs is 90 deg; This is done by inserting an inductor in series with coil of one pole pair, and by inserting a resistor in series with coil of another pole pair.

The magnetic system of the relay is constructed by attaching numbers of circular cut steel sheets. The magnetic pole are projected in the inner periphery of these laminated sheets.
The field coils are wound on these laminated poles. The field coil of two opposite facing poles are connected in series.
The aluminum cup or drum, fitted on a laminated iron core is carried by a spindle whose ends fit in jeweled cups or bearings. The laminated magnetic field is provided on inside the cup or drum to strengthen the magnetic field cutting the cup. 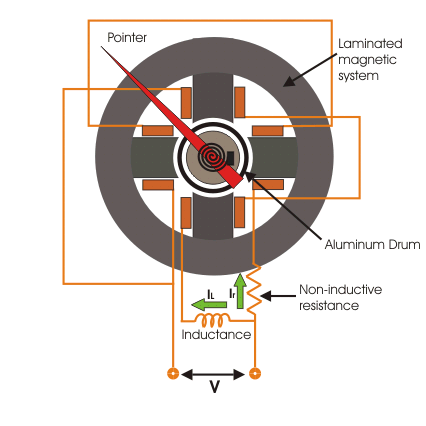 Induction cup relay is very suitable for directional or phase comparison units. This is because, besides the sensitivity, induction cup relay have steady non vibrating torque and parasitic torques due to current or voltage alone are small. 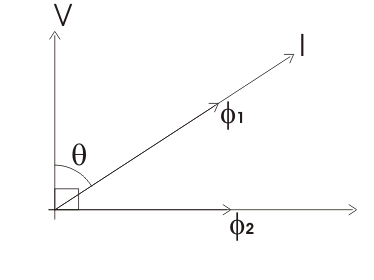 By manipulating the current voltage coil arrangements and the relative phase displacement angles between the various fluxes, induction cup relay can be made to measure either pure reactance or admittance. Such characteristics are discussed in greater detail in a session on electromagnetic distance relay.