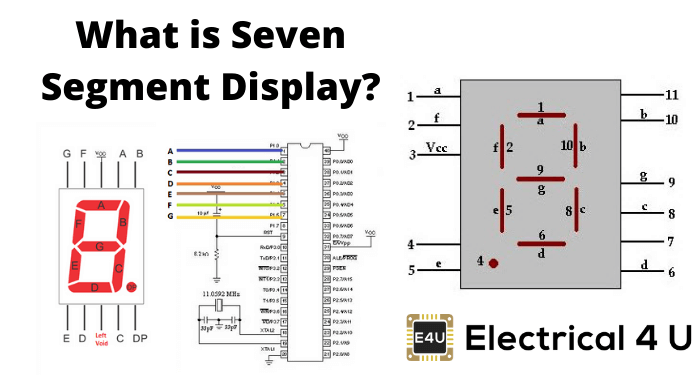 Almost everywhere we can find seven segment display; it is too common so that we often do not notice it at all. From pocket calculators, digital clocks and electronic test equipment to petrol pumps everywhere information is delivered through seven segment display.
A single seven segment display or a combination of such display arranged in an organized manner invariably meets our display requirement. Normally there are two types of displays are used those are LED (Light Emitting Diode) and LCD (Liquid crystal display) types.

F. W. Wood invented the concept of seven segment display in the year of 1908 as found in the Patents.
It actually displayed the number four by using a diagonal bar. Later the idea was taken and the display system used to be made by incandescent bulbs which were used in power plant boiler room signal panels in 1910. Finally from the year 1970 the use of Seven Segment Display became worldwide and hugely popular when it were started to made from LEDs.

The obvious question which arises now is that how the stuff works or rather how numbers can be displayed by a Seven Segment Display. To explain the method we assume that we are considering the display system made of separate LCDs. Now to display the numbers we have to take 8 LCDs as shown in the picture and arrange them exactly as shown in the figure. The design of the LCDs can be different but the arrangement has to be exactly similar to the figure.

To display the numbers from 0 to 9 the LCDs from A to G are lightened sequentially. So for displaying a zero all the LCDs except the G marked of the figure are turned on and we can see a zero being displayed.

And in the same way all the other digits can be shown by the sequential turning on of various LCDs to display all the numbers. Now we will look at the science and method behind the display of the codes.

As we have already shown that A to G is the LED or LCD displays and they are turned on sequentially to display the desired number. Now they have to be connected in a circuit which can be given input signal according to the nature of desired output. The first circuit diagram is of common cathode type and here ‘1’ means on and the individual diodes are connected as shown in the figure and the second diagram is of common anode type and here ‘0’ means on. The DP can be located on left or right side of the display figure. Furthermore this display figure not only can be used to display only numbers from 0 to 9 but also they can show the letters from A to F. The table given below gives the binary code for displaying different numeric characters as well as different alphabetical characters both for common cathode and common anode type displays.