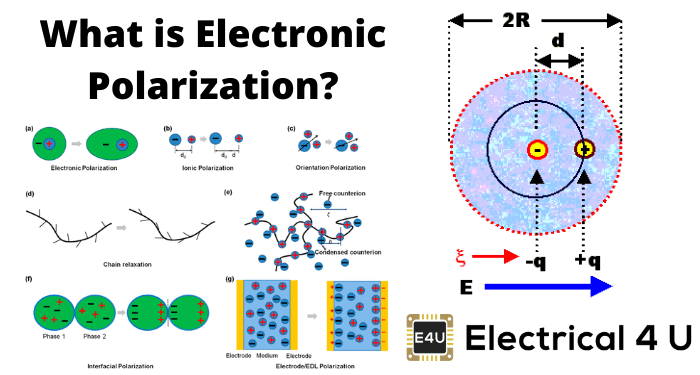 Let us consider a single atom of atomic number Z. Say, +e coulomb is the charge of each proton in the nucleus and -e coulomb is the charge of each electron surrounds the nucleus. All orbiting electrons in the atom form a spherical cloud of negative charge surrounds the positively charged nucleus. The charge of nucleus is +Ze coulombs and charge of the negative cloud of electrons is -Ze coulombs. Let us also assume that the negative charge of the electrons cloud is homogeneously distributed on a sphere of radius R. When there is no influence of any external electric field, the center of this sphere and center of nucleus of the atom coincide. Now, say an external electric field of intensity E volt per meter is applied on the atom. Because of this external electric field the nucleus of the atom is shifted towards negative intensity of the field and the electron cloud is shifted towards the positive intensity of the field.

Hence, the quantity of negative charge enclosed by the sphere of radius x is,

Only this much charge will apply coulombic force on the nucleus. So, according to Coulomb’s law, the force would be

From the above expression it is found that the electronic polarization or atomic polarization is dependent upon the radius (or volume) of the atom and the number of atoms presents in unit volume of the material.