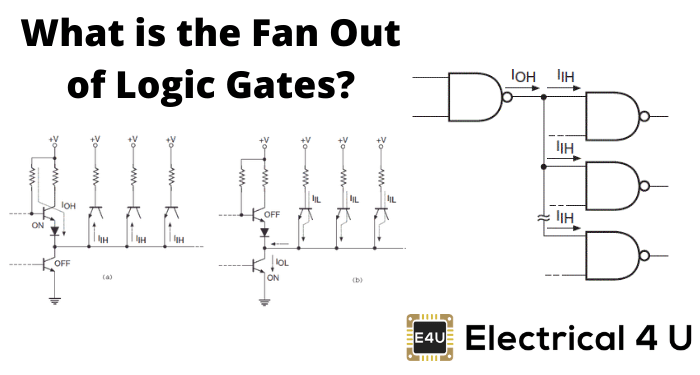 We can illustrate the point further with an example and the diagram above.
Suppose the current sourcing capability of a NAND gate is IOH when the output of it is in logic high and the inputs of the logic gates which are fed from the output of this logic gate is IIH. We can see this in the diagram also. Now the maximum number of inputs which this output of the logic gate will be able to drive is IOH/ IIH. This will be applicable when the when that output will be in high state. Now considering the case when the output is in the state of logic LOW then the let us take the maximum current sinking capability as IOL. And then again just as the previous one the sinking current which is fed to all the connected inputs of various logic gates is IIL. We are going to show this in the next diagram.

Now in many cases the values of IOH/IIHand IOL / IIL are different, in that case the smaller of the two is taken as Fan Out of Logic Gates and all the calculations are done based on that value.

The first figure is for the state when the logic is high and the second figure is during the logic low state. For standard TTL family devices the maximum high state output sourcing current and the maximum high state input current are 400 mu A and 40 mu A respectively. The same values for low state are 16 μ A and 1.6 μ A respectively. We have discussed about the TTLs in other article.