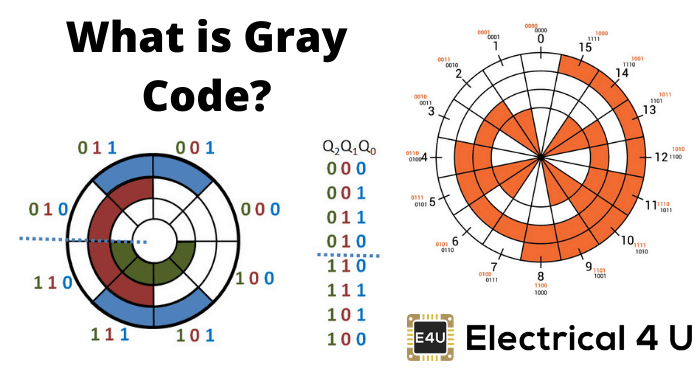 What is Gray Code?

Gray code – also known as Cyclic Code, Reflected Binary Code (RBC), Reflected Binary (RB) or Grey code – is defined as an ordering of the binary number system such that each incremental value can only differ by one bit. In gray code, while traversing from one step to another step only one bit in the code group changes. That is to say that two adjacent code numbers differ from each other by only one bit.

Gray code is the most popular of the unit distance codes, but it is not suitable for arithmetic operations. Gray code has some applications in analog to digital converters, as well as being used for error correction in digital communication. Gray code can be difficult to understand initially, but becomes much easier to understand when looking at the gray code tables below.

The logical circuit which converts the binary code to equivalent gray code is known as binary to gray code converter. An n-bit gray code can be obtained by reflecting an n-1 bit code about an axis after 2n-1 rows and putting the MSB (Most Significant Bit) of 0 above the axis and the MSB of 1 below the axis. Reflection of Gray codes is shown below.

The 4 bit binary to gray code conversion table is given below:

The binary to gray code converter circuit is shown below:

How to Convert Binary to Gray Code

Say we have a binary number 01001 which we wish to convert to gray code. Let’s go through an example of how we would perform this conversion:

In a gray to binary code converter, the input is gray code and output is its equivalent binary code.

The gray code to binary converter circuit is shown below:

Gray code to binary conversion is again a very simple and easy process. Following steps can make your idea clear on this type of conversions.

One example given below will make your idea clear.

The bits of 4-bit gray code are considered as G4G3G2G1. Now from conversion table,

Frank Gray – the person Gray code was named after – patented a Pulse Code Modulation (PCM) tube. This PCM tube was made by Raymond W. Sears of Bell Labs (working with Frank Gray and William M. Goodall) who credited Gray for the idea of the reflected binary code (i.e. gray code). You can read this in television by pulse code modulation.

Some other applications of gray code: