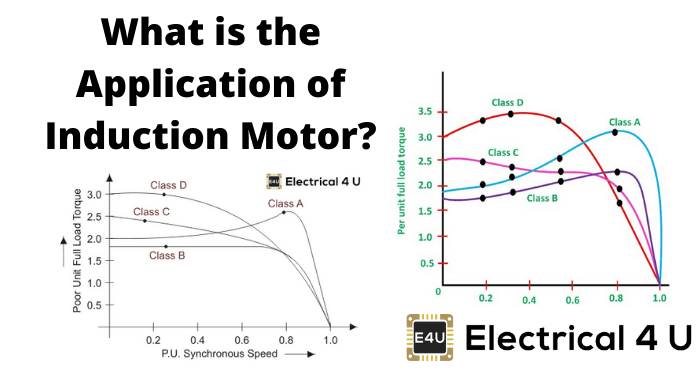 An induction motor is an AC electric motor in which the electric current in the rotor needed to produce torque is obtained by electromagnetic induction from the magnetic field of the stator winding. The application of induction motor differs by the type of rotor which is being used:

A squirrel type rotor is used in a squirrel cage motor. It has a cylindrical laminated core with slot parallel to the shaft, uninsulated conductor bar of aluminum or copper in each slot of the rotor and the rotor conductor are short-circuited by heavy end ring at the end of the rotor.

The end ring and the conductor bar looks same as a cage of squirrel so it is named as squirrel cage rotor.

The Torque Slip characteristics determines the use of squirrel cage motor which is stated as under,

Generally, it is classified into four classes:

Slip Ring Rotor consists of a sloted armature, insulated conductor arranged in slots forming a three-phase double layer distribution winding similar to that of the stator winding. The rotor is star connected and the open ends of the rotor are connected with brushes to slip ring mounted in the shaft whereas the other end of slip ring is connected to a variable resistor which is totally used for speed control purpose as stated in the below diagram.